Over the hills and far away

We’ve left the coast and gone North West towards the Basque region and on our way, stopped in the lovely town of Zaragoza …2,000 years of history, Romans , Muslims, Jews and Christians have all left their mark on this city.  Home of Francisco De Goya who in his early career left a permanent legacy on several sites around the city. The Bascilica was particularly beautiful, a famous pilgrimage site with multiple domes sat on the River Ebro in the Aragon Region. We did go inside the Bascillica where you aren’t allowed to take pics. I don’t  have feelings either way on Religion and respect most peoples beliefs, but I do get a bit miffed when I see the enormous wealth poured into churches and the like. To each their own but I still find it annoying. Whilst I am having a little gripe…….Smoking ! These guys are gold medal finalists. Unlike Australia, you can still have a fag almost anywhere and these buggers take full advantage of it. Oldies, kids, pregnant mothers………I reckon the dogs would give it a go if they could strike a bloody match. Ok rant over! 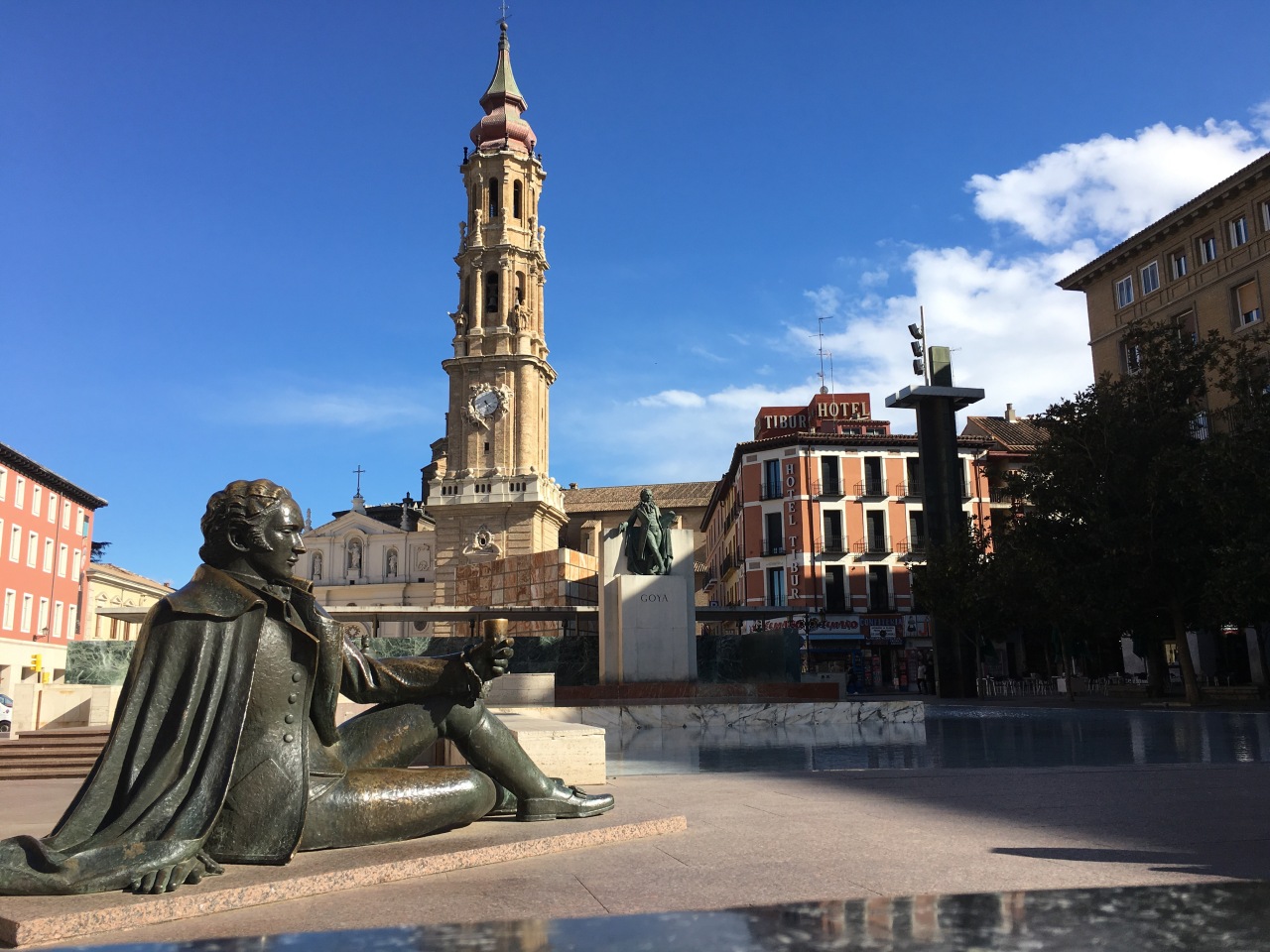 We wandered around the City for a few hours exploring then stopped for a bite to eat and a quick drink. Time to catch the bus back to our site …. oh dear for those of you who know how Amanda reacts to certain types of seafood, you’ll know how this ends, so jump to next pic and spare yourself the gory details. ” I feel a bit dizzy and sweaty” she said as we just sat down on the bus. “I want to get off I feel very strange” Don’t be daft said I, we’ve only just got on and it’s getting dark and we need some light to see where the hell we disembark. Just empty the contents of the plastic bag and hope for the best love. The bus was at its terminus and got steadily chockers with the usual  commuters of men women and kids. As Amanda started to look worse I was rubbing her back and looking a bit more concerned, then BINGO ! The head started to go around like Linda Blair from The Exorcist and the bag barely contained the full contents of Amanda’s stomach……Interestingly some people looked away,can’t blame them really, I considered pretending I was traveling solo. A couple of concerned Ladies offered tissues, mints and some perfume lol. What a 45 minute trip that was. So off we get, dispose of bag (correctly) and help Linda, sorry I mean Amanda, back to the safety and comfort of Pinot. Lovely Arvo that one was haha.

Grigio and her Captain 😊

Last time we filled up with diesel it was a reasonable 66 Euro’s a tank. The fellow next to me in the Station was forking over a whopping 997 Euro’s for his truck!!!!! Granted it was a new car carrier and the company would have been paying but still. We left our site at a reasonable time…….we seem to get later and later and followed a flash looking outfit for a few miles. Certainly not roughing it here. The sports Jag alone would be worth twice my entire set up. Are you sure we can’t buy that canoe love? Haha

Next day headed towards Pamplona, (where the bulls kill people in the streets) fair enough too I say, it’s only payback really isn’t it. Beautiful scenery along the way, through Pear and Peach Orchards and fields full of Artichokes. Not a fan of them really so didn’t pinch any on the way. Through mountain ranges of Fir trees covered in cobwebs which we found out were Pine Precessionary moths that lay their eggs in the trees then turn into thousands of gross looking caterpillars huddled together. Glad we did not stop to touch any of them as apparently they can be very itchy and deadly to dogs. There are shed loads of dogs here…………no I won’t say what I was going to say, our dog loving friends would shoot me!

Passed plenty of Stork nests on top of power poles complete with Mum’s and babies but hard to capture a clear photo when whizzing past.

It was starting to get very chilly again so much so when we stumbled on our lunch spot it was hat and glove time again with a balmy 4 degrees!! Beautiful  village of Sol Del Rey Catolico.. 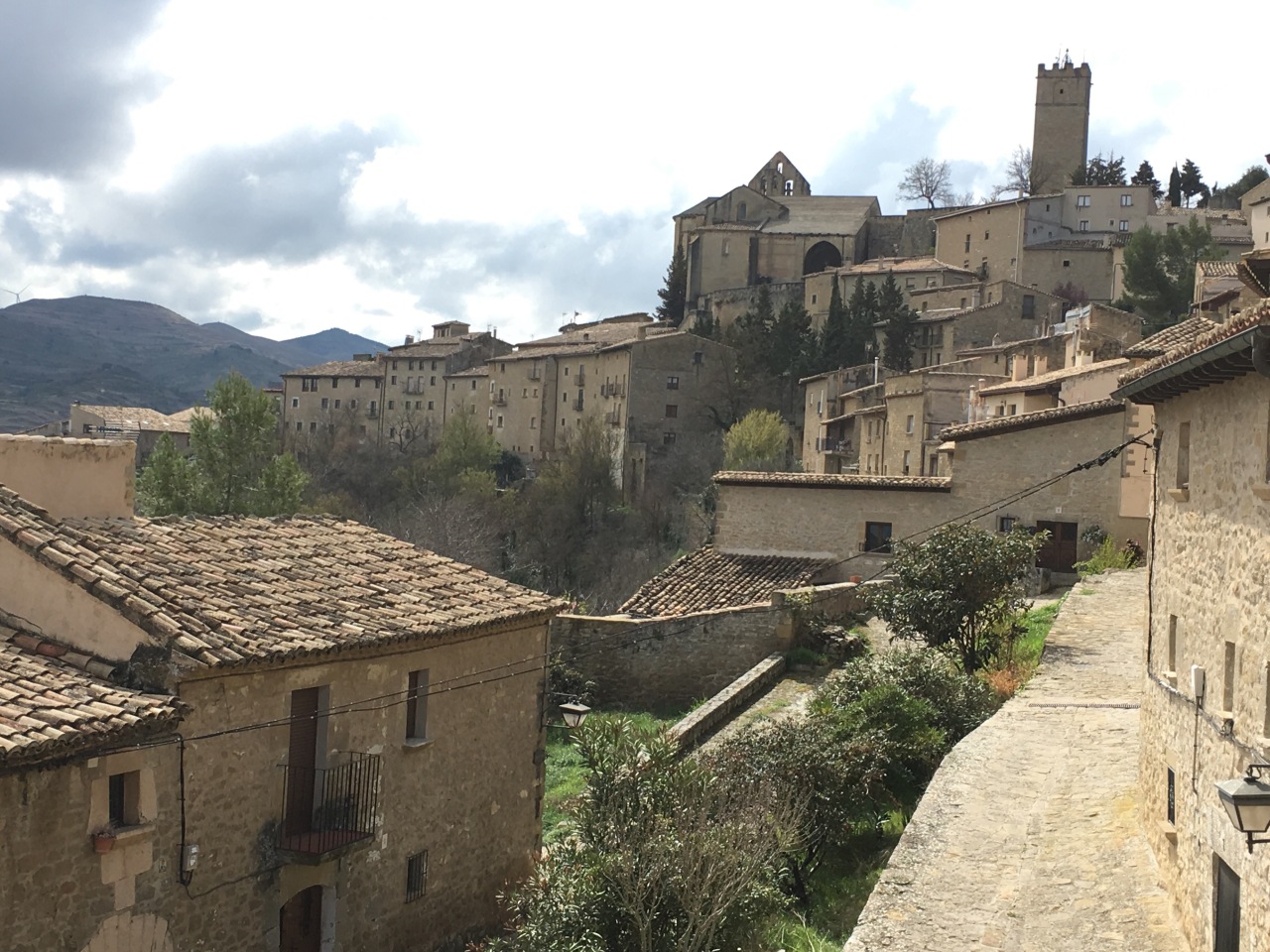 It’s one of the pleasures travelling this way, with no real set agenda, you take a turn and are sometimes rewarded with beautiful old towns hidden away with a slow pace, sheltered from the hectic pace some folk are living only 20 or thirty miles away The Aragonese and Navarese foothills can be seen in the background. Very serene place and you could pick up a renovator for only 60,000 Euros. A very pleasant couple of hours then on to Pamplona and our very kind Navigation lady took us straight through the center of Pamplona , you have to have eyes at the back of your head and nerves of steel as the Spainards love to over take on the wrong side on a roundabout…Arrived late afternoon and found our site Ezscabal Ex  outside Pamplona. Lovely spot facilities were not great but suited our needs. Very quiet with only 4 other motorhome’s on site. a bit different come July when the Running of the Bull’s is on … The next day was seriously wet so put our selves in lock down mode… listened to music and had a movie marathon in the afternoon with surrond sound and a bottle of Red. Got the maps out and did some more planning. Amanda’s glass is the empty one, so no surprise there then. 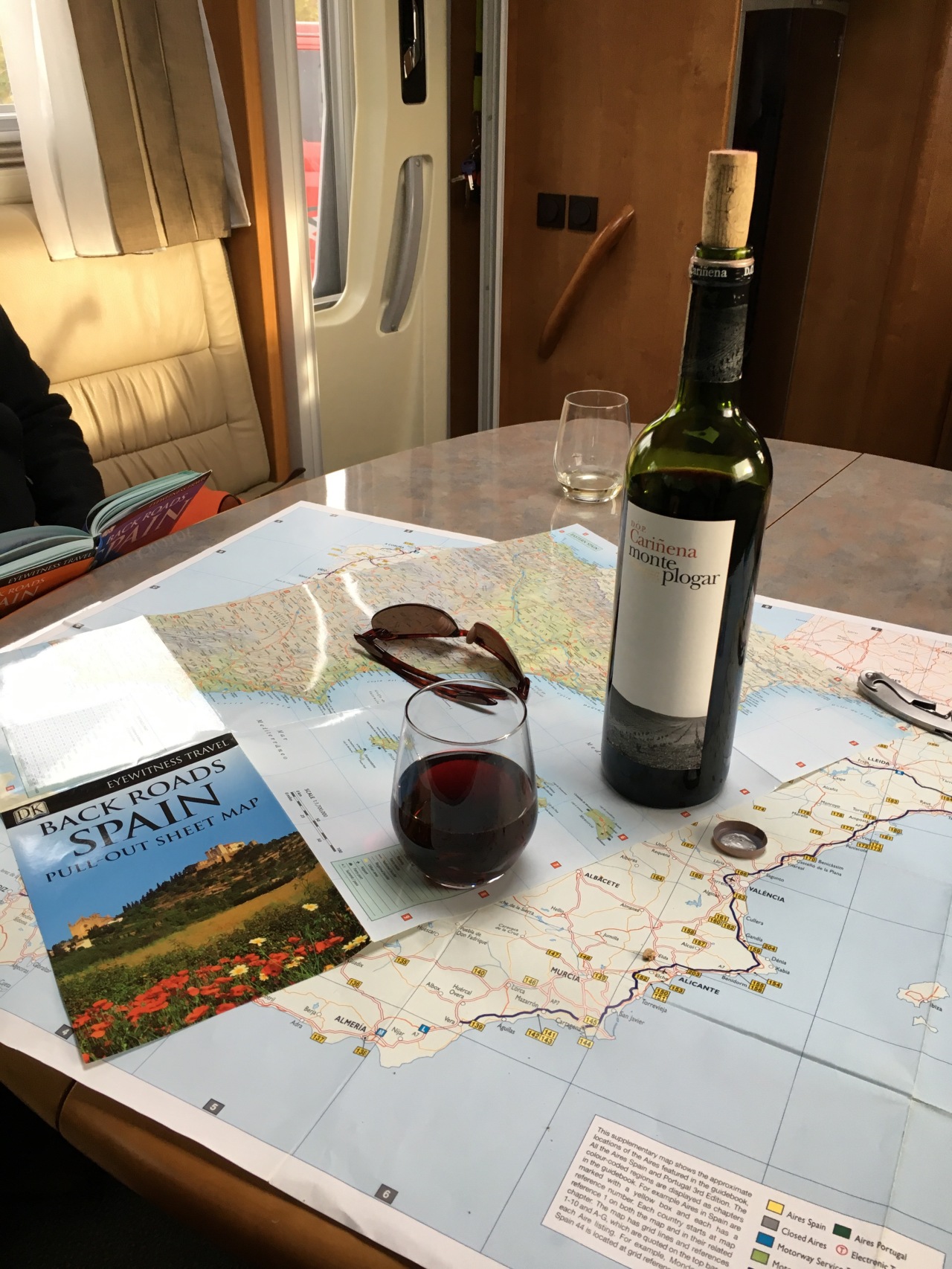 Next day woke up to a beautiful day so we rode into Pamplona on a great bike path that hugs the river all the way into the city. Passed a couple villages on the Camino route where you get your passport stamped if you are walking the Camino Way. 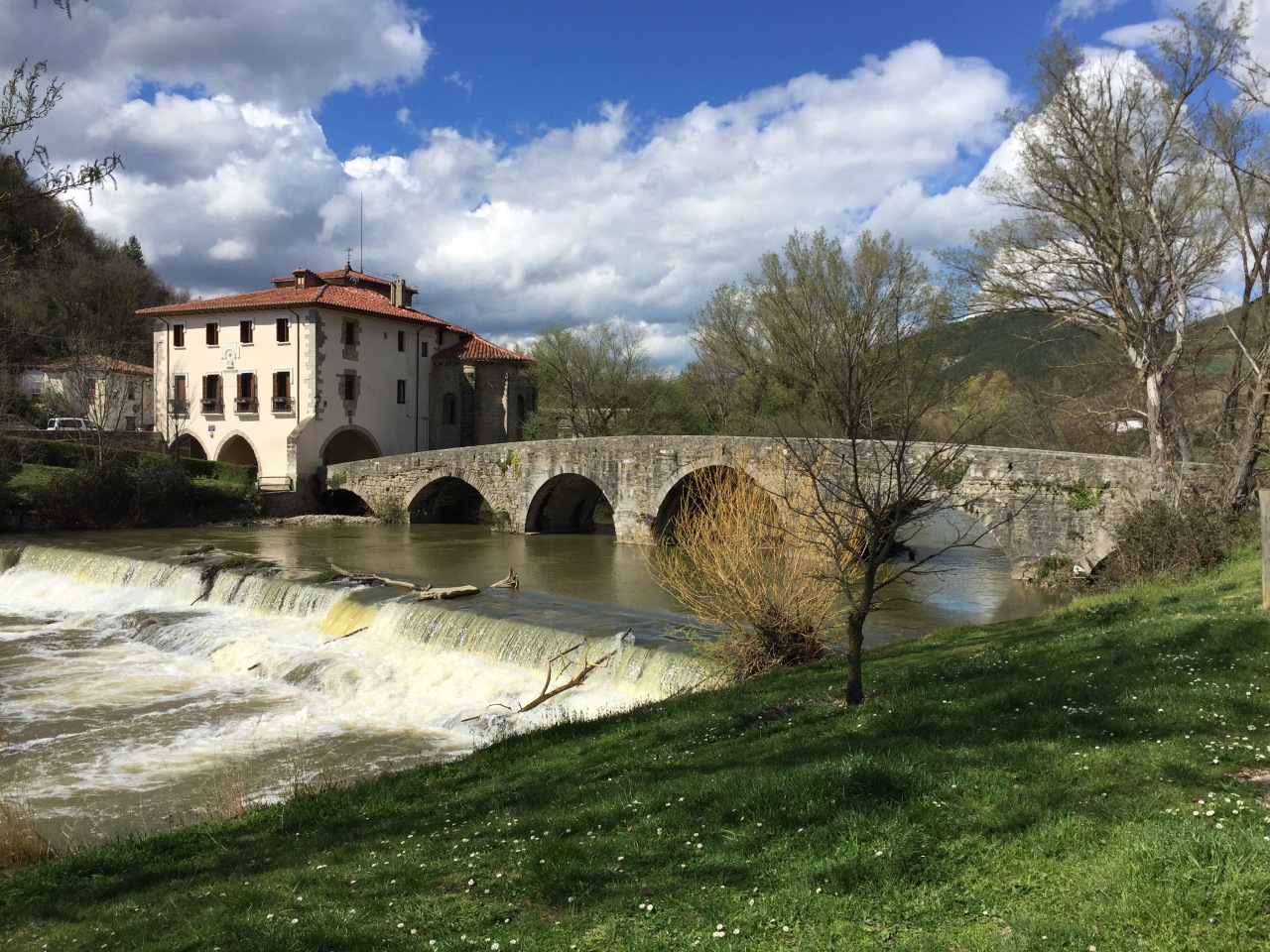 Hats off to our friends Tom and Sandy. All the walking we do and we still cannot imagine doing the distances you did everyday for three weeks. Are we tempted?…….nah not a chance lol

It was an easy 15k each way and the benefit of going on bikes meant we could ride between all the must see spots in a day. I know we could have spent much more time here but we have so much to see and so little time……only a year or so haha 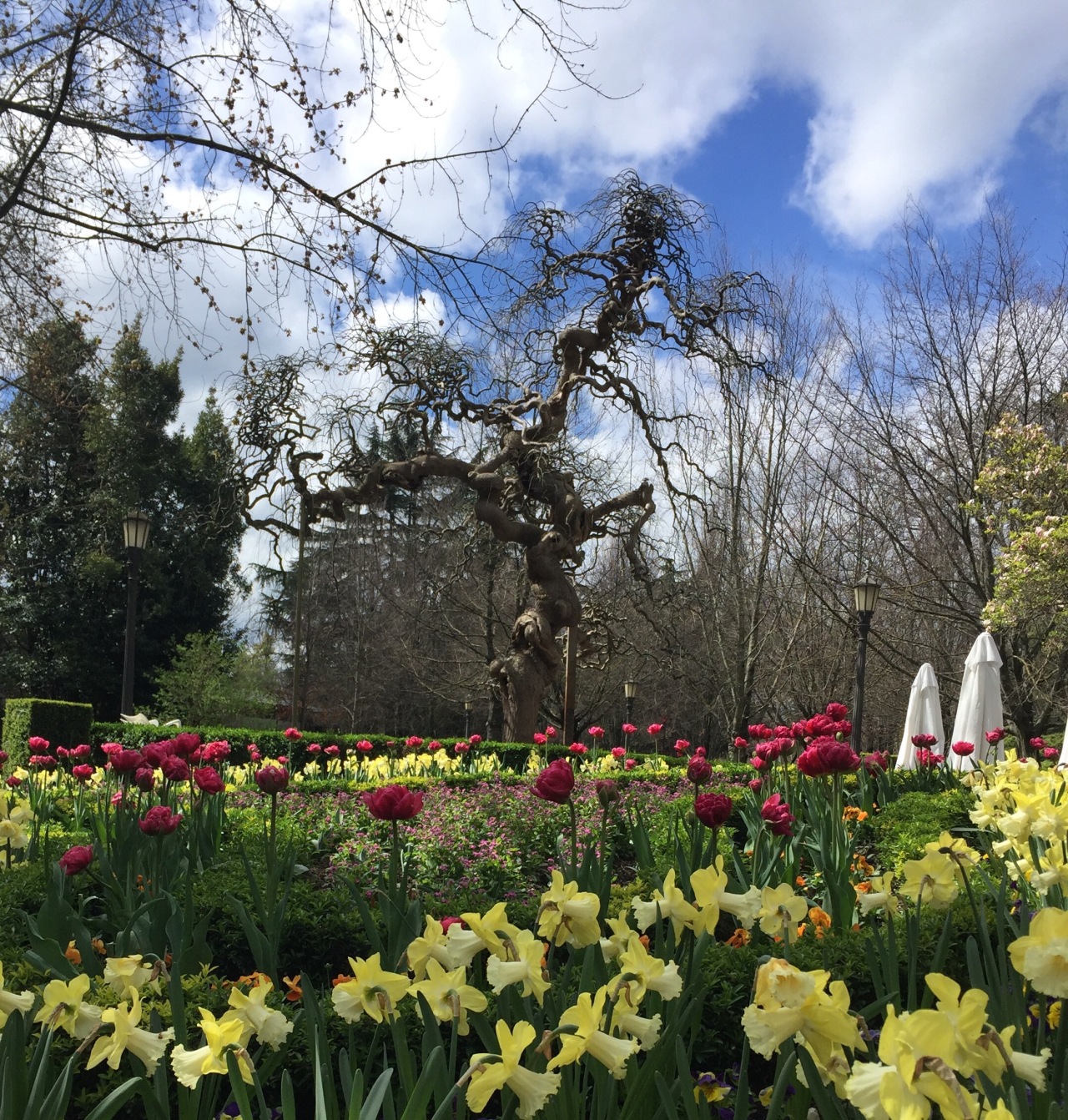 Spring had sprung in Pamplona 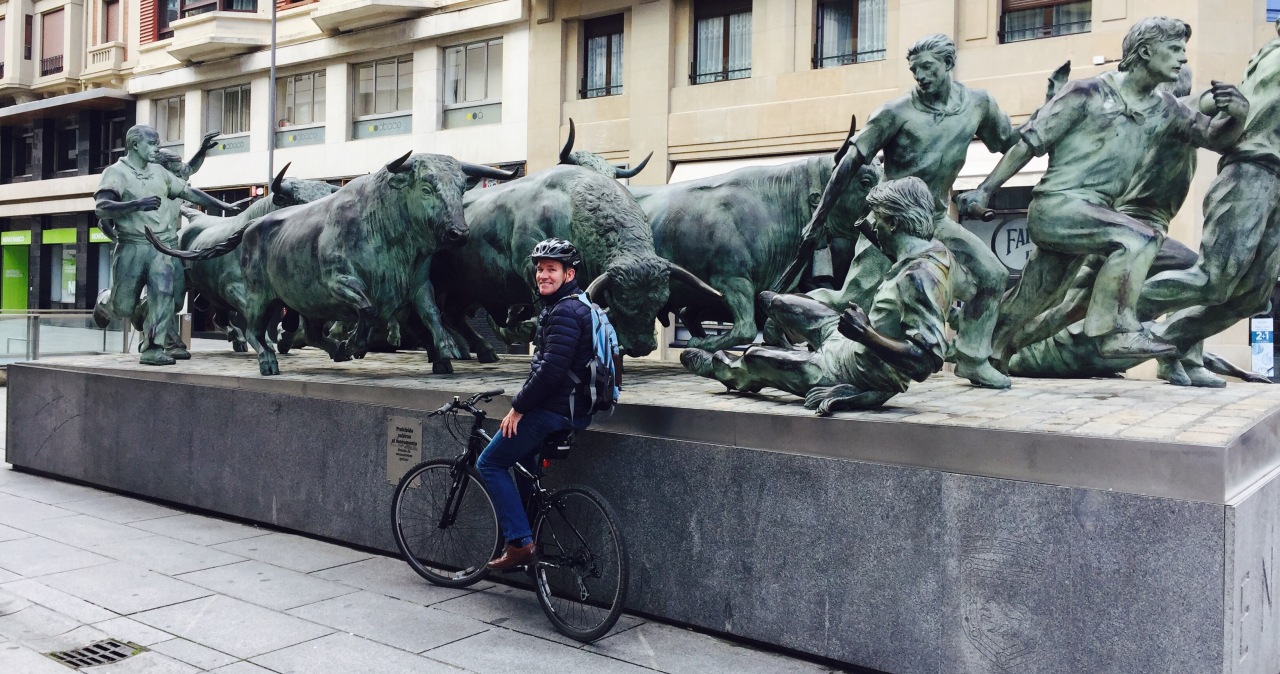 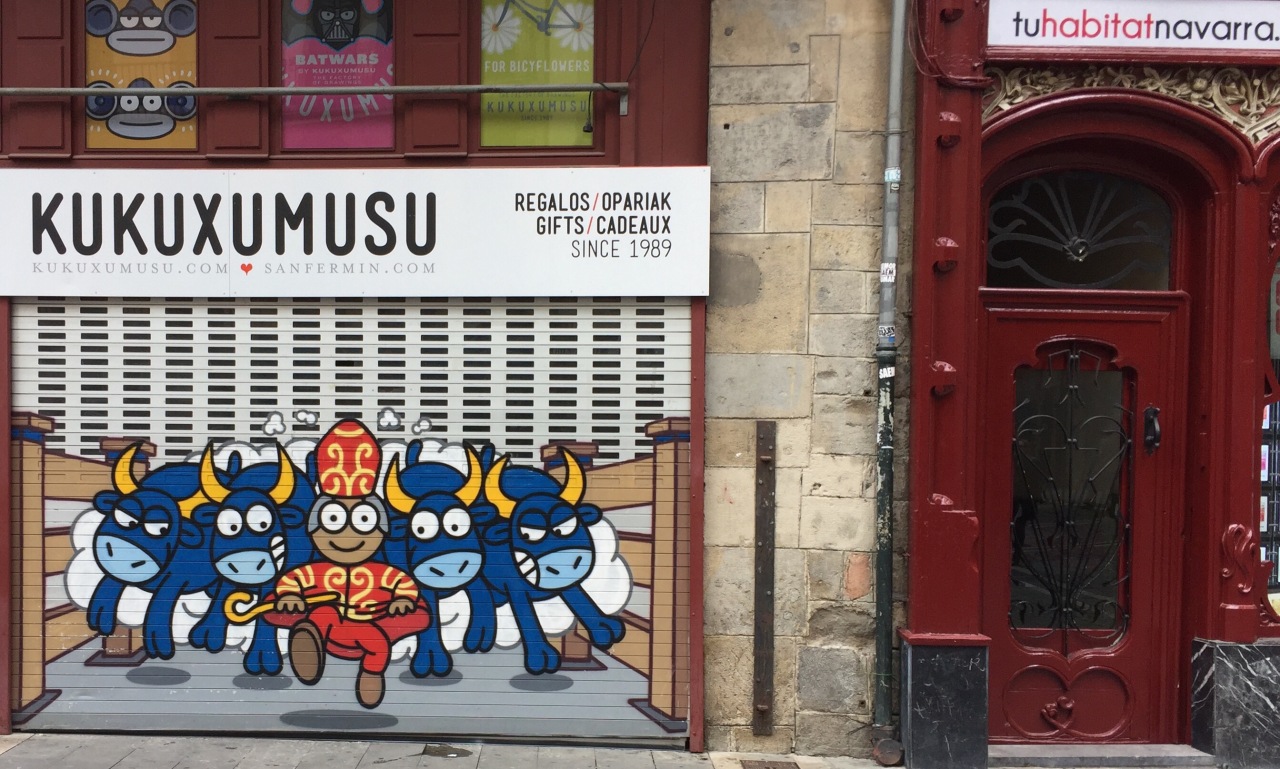 These were the only bull’s chasing us 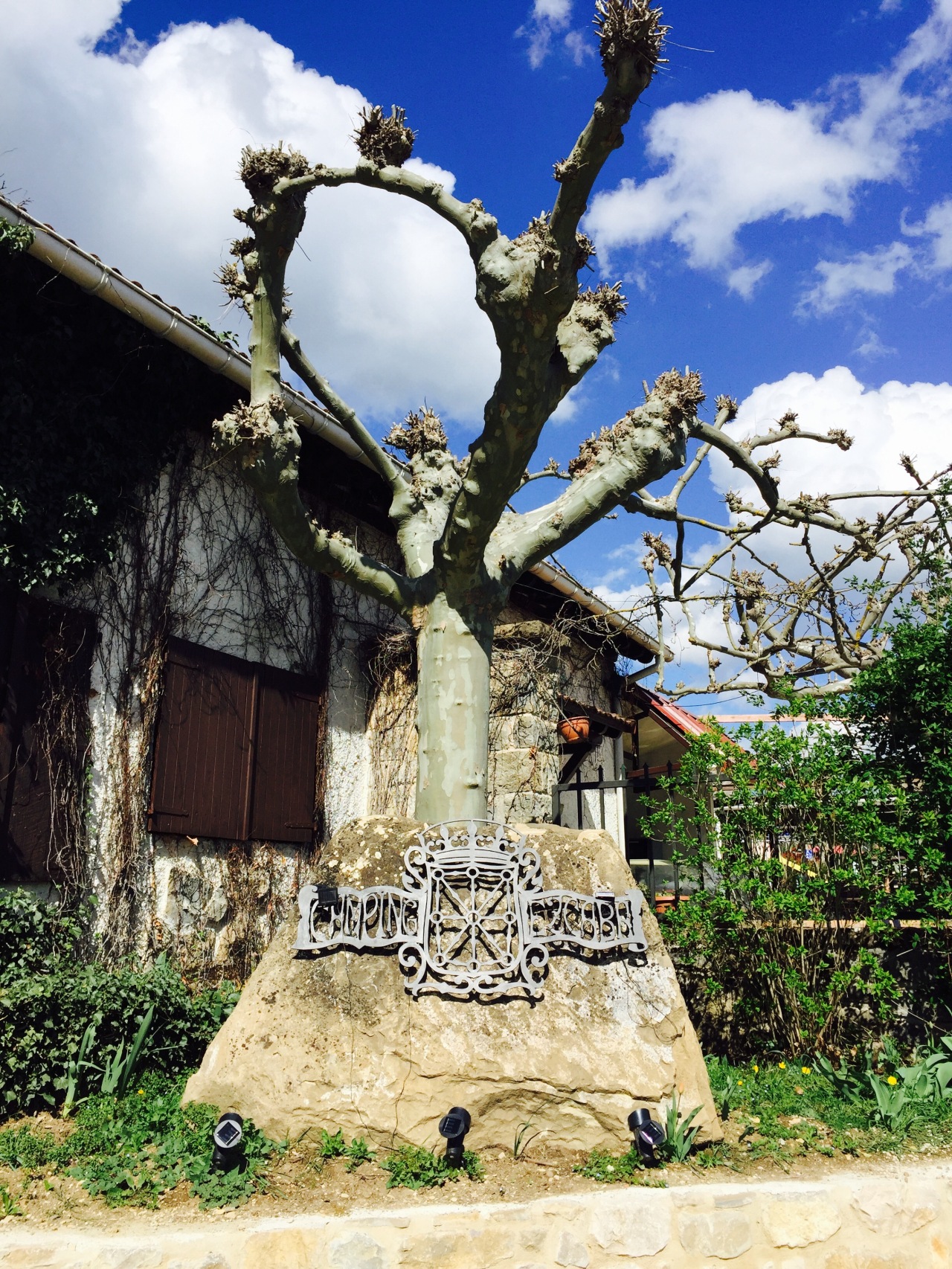 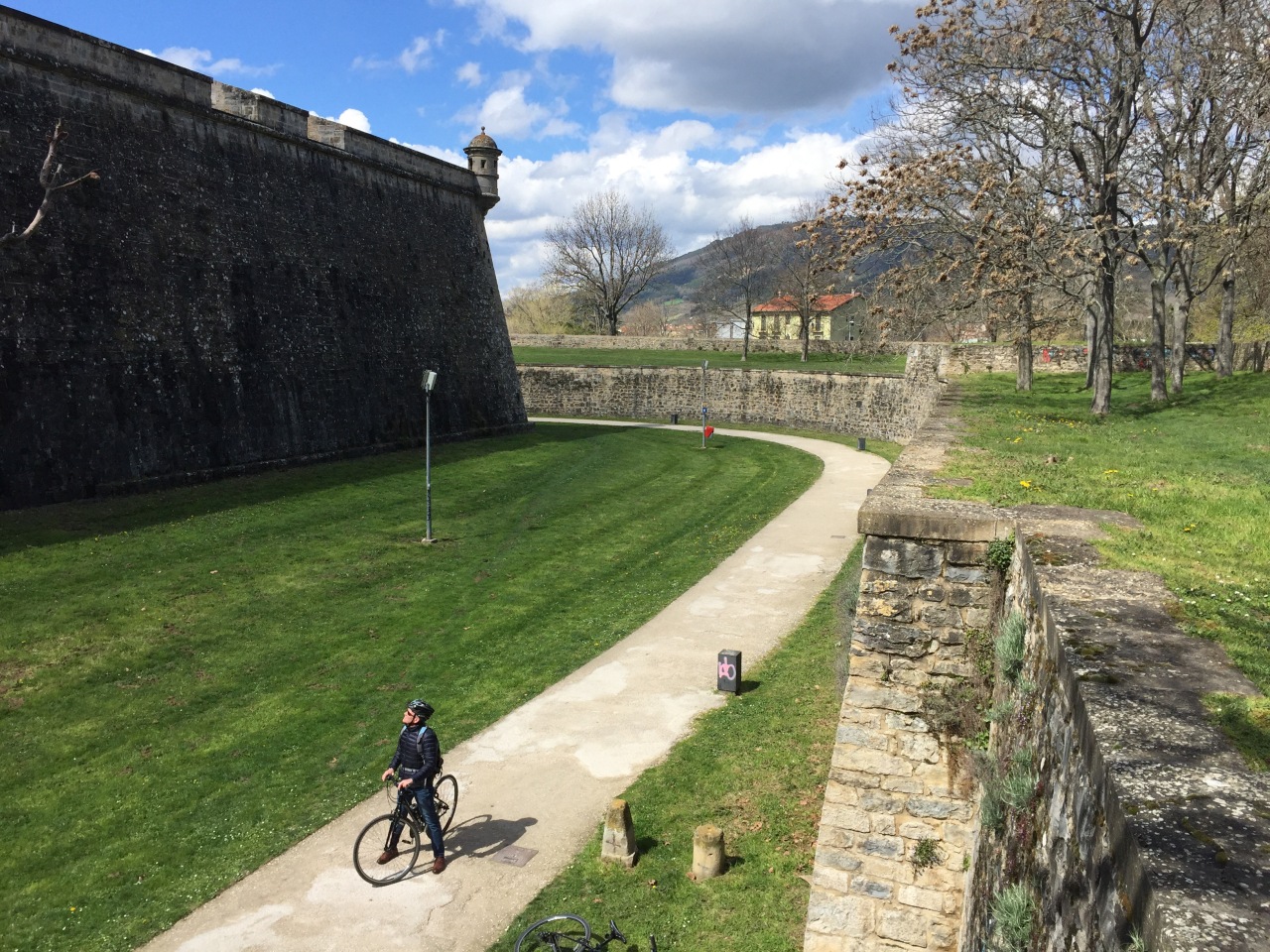 So folks, until next time , have fun and may your Gods go with you !