We have had another grand few days and again met some great people. Amanda, who never chats to anyone, other than statues and the like, started a conversation with some humans who are from about 5k’s from where she grew up in Lancashire. June and Peter are renting an apartment here for 6 months to escape the UK winter, with their lovely Old English sheepdog in tow. Not sure why they’re called a sheep dog, cause they look so damn big and placid, I can’t see how they’d direct a load of dopey sheep. After a very brief chat at a bar (where else) they had to dash off and have the big doggie visit a beauty salon for a cut and blow dry. I did offer to nip off and grab my clippers but they declined and spent 60 odd Euros instead. Madness if you ask me, I’d have happily given her a number 4 all over for a tenner.  Anyway they arranged to meet us the following night and we all enjoyed a laugh and a couple of pints. So we are catching up with them back in Lancs in July for a few pints of the local real ale.

We did stop for a coffee and I met a lovely young woman but her partner was a right stiff. 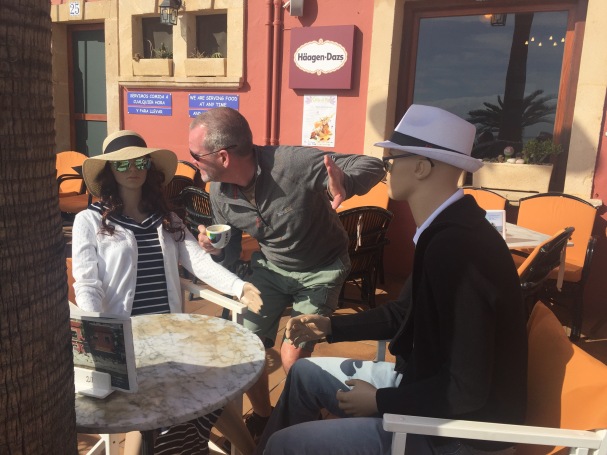 So far on the very early stages of this little adventure, we’ve mentioned how fortunate we’ve been to encounter some wonderful motor homing folk. Yep, no surprises here. Pat and John and their two doggies (what is it with these people)? propped up beside us and we have had lots of great advice and have left with a new mop for washing Pinot, a collapsible bucket (who knew) a ground sheet that doesn’t need pegging down and various camping related books and maps, together of course with some brilliant refs on where and where not to go. Thanks guys it was a hoot and we look forward to seeing you in the Orkneys this summer for a couple of days.

Ever onward, we moved on to Valencia, advancing North to pick up the bike, who hasn’t been christened yet ( Amanda still can’t decide). I thought “The bike” would do, but apparently not. Stay tuned…..any suggestions welcome. There were shed loads of orange orchards as we drove closer to the area, so there should be no reason to acquire a dose of scurvy on this part of the trip.

Pinot settled, we caught a bus into town and unknown to us Valencia is about to have it’s annual knees up. The population swells from 1 million to 3 million people to celebrate Las Fallas literally translated into The Fires. It’s a huge 5 day celebration where all these bods let off firecrackers from dawn to dusk all over the city. When we jumped off the bus we were surrounded by a horde of drinking, laughing, eating Valencians’  intent on throwing penny bangers everywhere and scaring the bejesus out of us. The kids were having a great old time. I remember doing the same thing in Belfast as a kid, then the fun police stopped it because of the troubles. It was Sunday and everyone was in town for a pre Las Fallas practice.

They have some brilliant massive paper mache (not sure about spelling) figures built in the preceding months at huge costs of up to $75,000 each, so they can set fire to them all over the City at midnight. It must be incredible to watch. Pics below of some we saw

We saw some cracking old buildings and St Mary’s Cathedral, built on a Roman Temple which later became a Mosque and then the Cathedral sometime around the 13th Century. I have included a picture for Stu back in Brissie, because I know he loves this stuff 😉 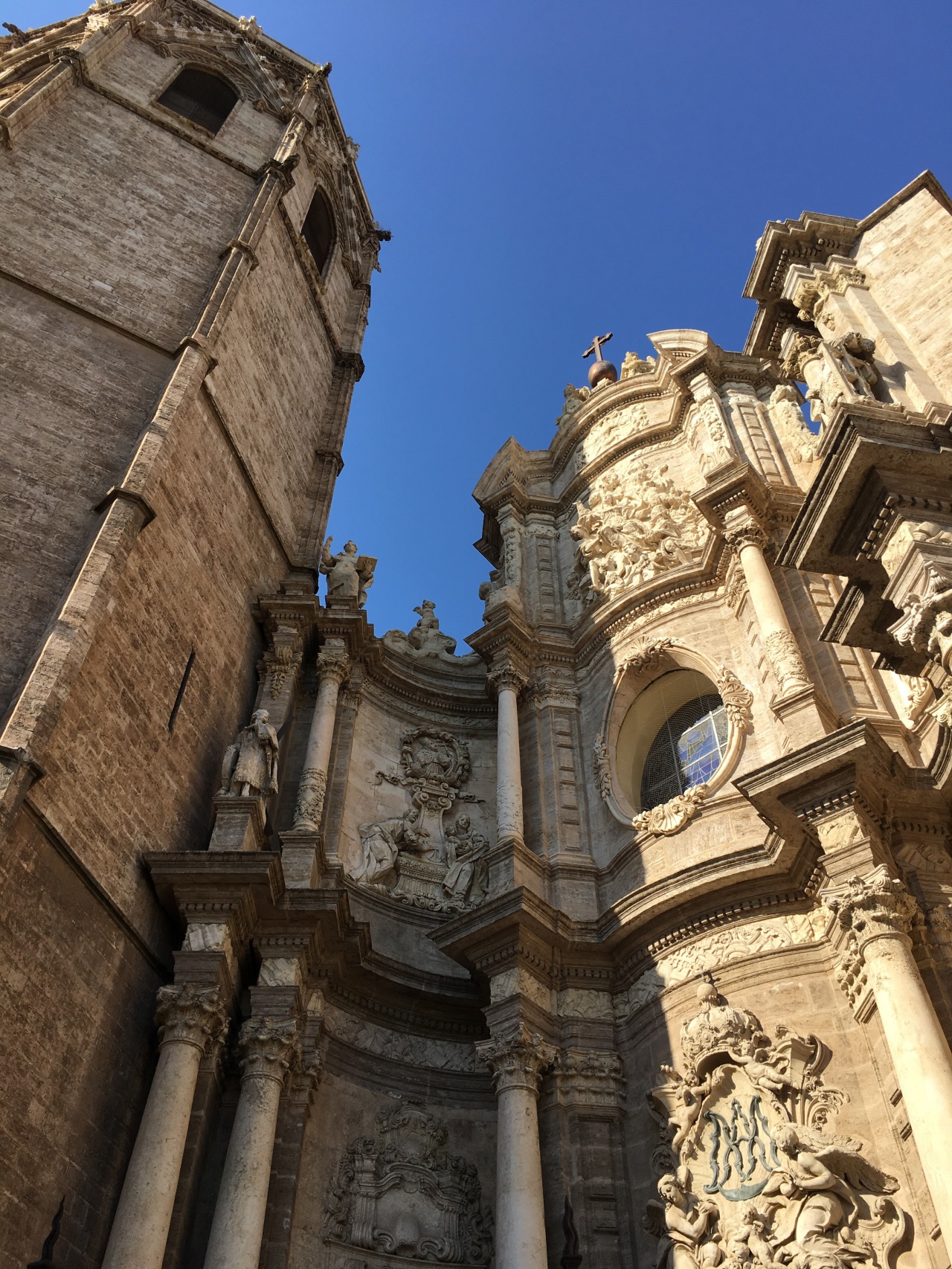 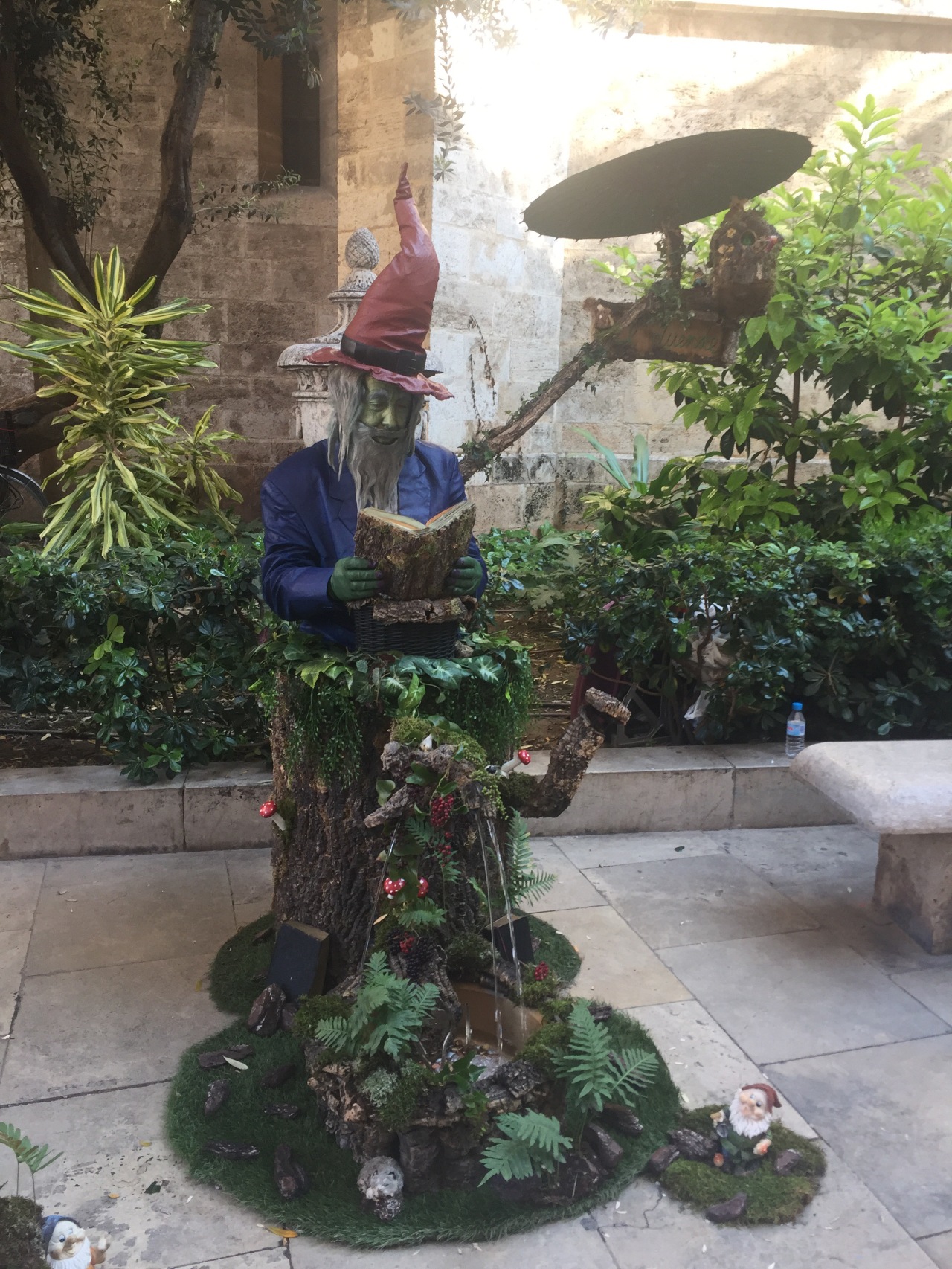 Everyone was getting into the party and plenty of beer and wine was being consumed. We enjoyed a couple of Sangrias ourselves…..it was only right after all.

Some seriously brilliant sculptures a week before they are all set to go up in smoke. Apparently the best one is kept each year and is included with all past winners somewhere near the City. 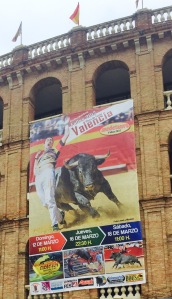 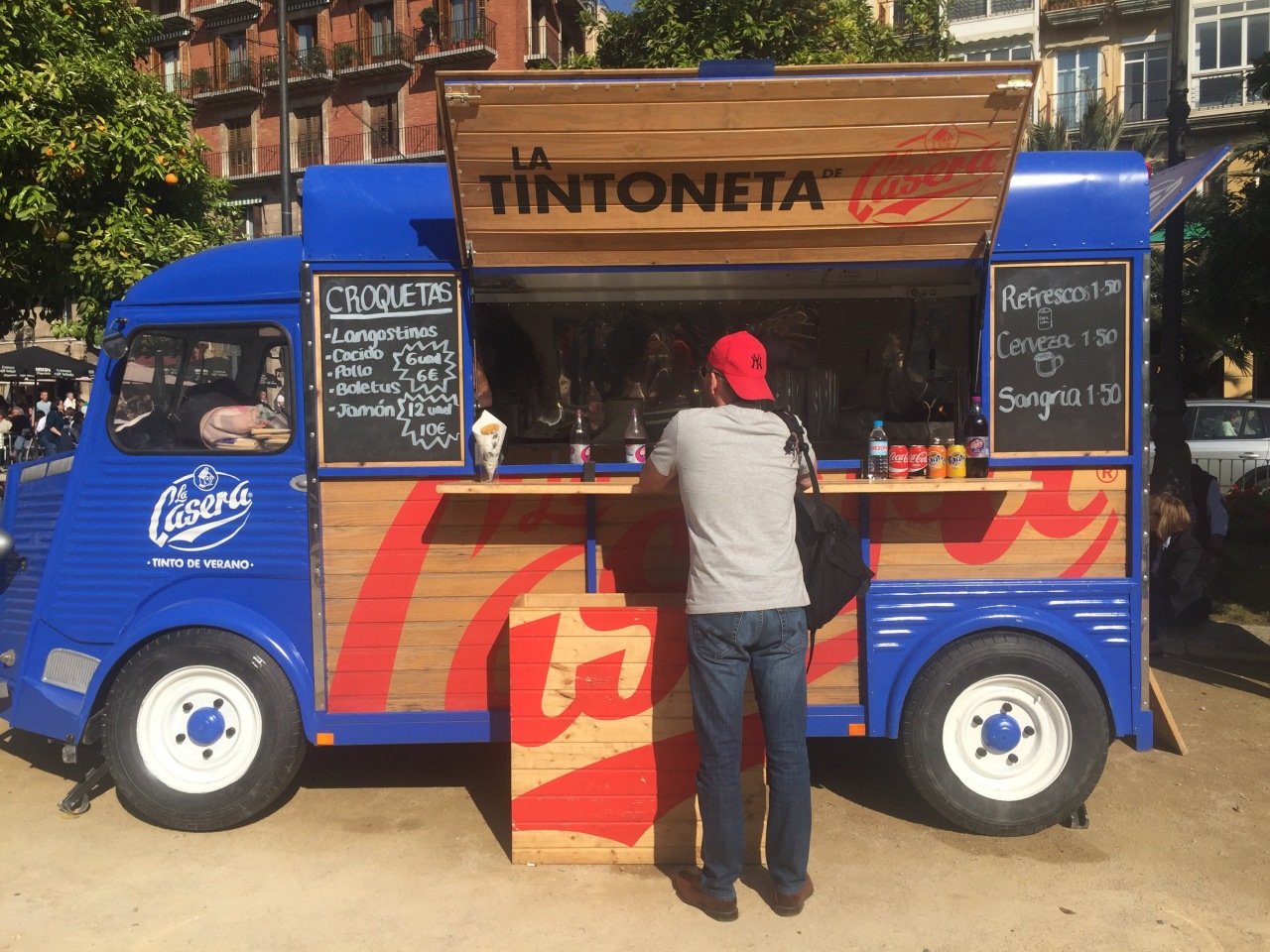 We can drink much faster when we wear our hats this way. 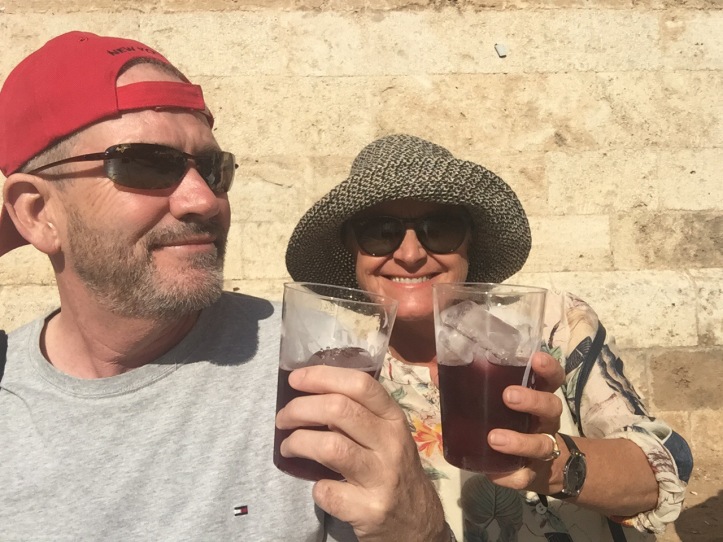 Our next trip back to town for some culture was not quite as nice as the previous. The weather had turned pretty nasty. Only 9 degrees and rain, so we dug the jackets out and went in to the Mercado Central Valencia……definately not my idea. It was full of all the usual lovely food stuff and presented beautifully in a lovely building built only in the last 100 years. Everything looked super fresh.

Love and best wishes till next time…………….keep smiling xx