A quick exit of Czech Republic and back into Austria to visit the capital Vienna, the residence of choice for numerous composers and musicians including Mozart and Beethoven. A City, which like London started as a Roman settlement a couple of millennia ago. We are parked in a site about 14 k’s from the City so we have an opportunity to cycle in for the day. It has had a pretty turbulent recent history and not all of it pretty. Sadly the Jewish population certainly had a very rough time here in the late 30’s and 40’s and whilst it was annexed from Germany it sent almost1 million men to war. Seemingly Hitler wasn’t a fan of Vienna and was keen to see it become a backwater while he wanted Linz, his birthplace to become the centre of culture. Just something else happily he got wrong. Vienna was too far South of Blighty so it escaped bombing until the Allies could take off from Italy and it was then pretty heavily smashed. Much of the City has had major refurbishment in the following decades.

Interestingly, apparently there were supposedly more spies living and or operating out of here than there were Austrian soldiers during the Cold War. A very varied and interesting past indeed.

Anyway we spent a couple of hours the night before exploring our immediate surrounds. A five minute walk from Pinot was the impressive Klosterneuburg palace and in the pic below you can see the huge burly lads adorning the walls. A really impressive Palace in a pretty low key area really. It’s well worth an hour of anyone’s time to visit. There’s even a very nice wine bar/collar adjacent if you feel the need.

So on a nice warm bright morning we cycled in to get some architectural education and maybe have a Viennese Waltz,,,,NOT !

lots of lovely buildings and too many to bung into this blog….you’ll just have to take my word for it.

Wow, first impressions of Vienna while cycling along the Danube was the huge amount of street art along the banks of the donaucanel. 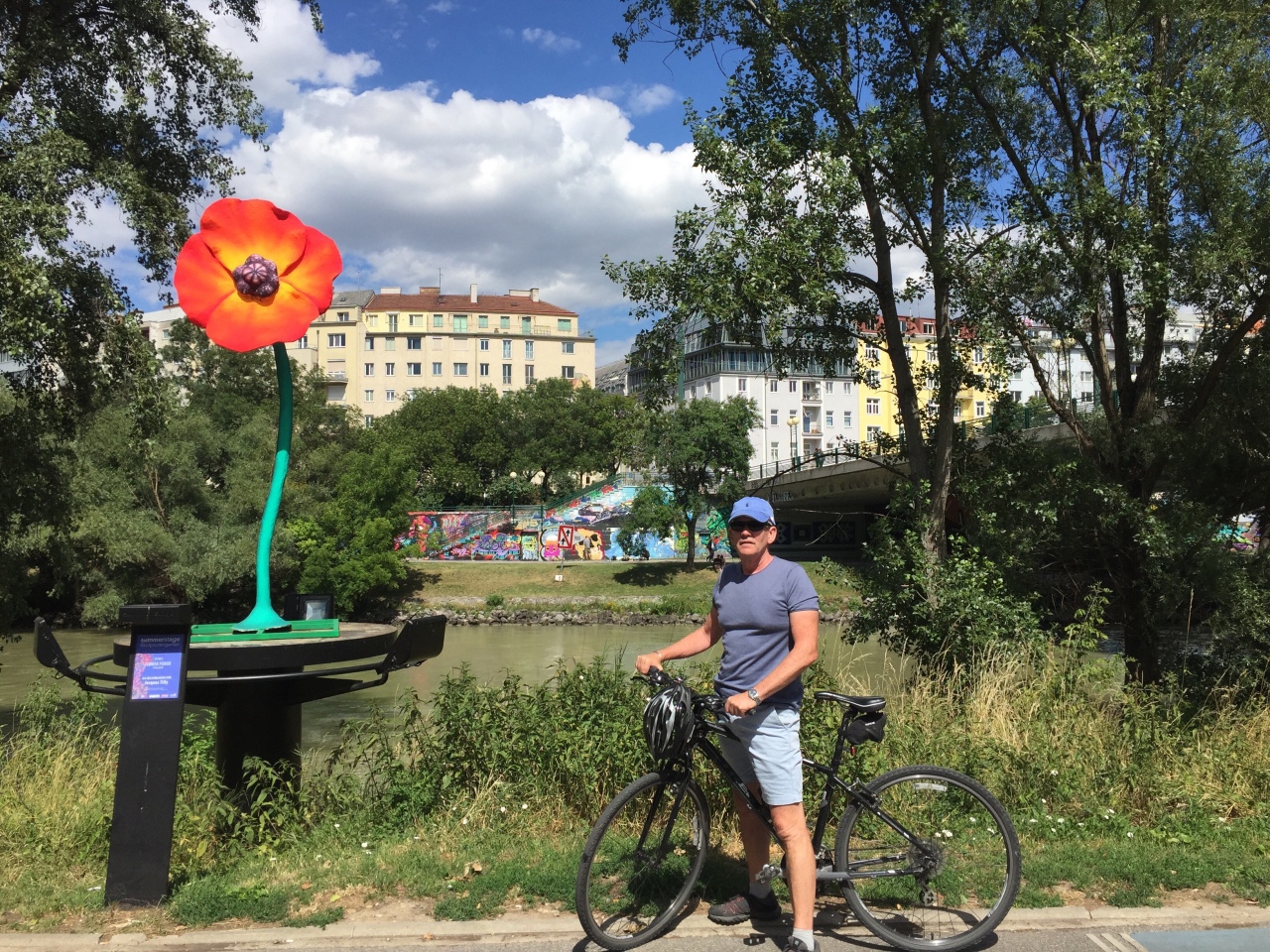 this was the scene for at least a couple of km’s with trendy restaurants and bars in between, there were also a few groups of lads and lasses lounging about with bottles in hand, looking a wee bit worse for wear.

I am way to impatient to sit in the back of a horse drawn carriage while the driver waffles on about this and that……we had done a bit of reading on where and what we wanted to see and cheekily cycled behind the carriages and worked out a route which covered the best..Amanda will shoot me for not loading lots of pics here with the old buildings, but once you’ve seen 10, they all start to look similar. (no, sorry Amanda here , not getting away with that!).

Vienna city hall , could not really capture the beauty of this place as the 2018 film festival was on, live music , gourmet food and great wine . Sure somewhere in the program the films made an appearance….. but we didn’t see any.

Where do you start when you have limited time ? We cycled a great deal and walked for hours around this beautiful city and saw a few, well, a lot of the well known must do’s ..But there was so much we didn’t see. It’s a definite long weekend getaway.

The Ankeruhr Vienna clock , at 12 noon each day 12 historical figures move along with musical accompaniments.

Hofburg, the Imperial Palace, actually it was only their Summer Palace. Elisabeth the Empress of Austria was a bit of a Fairytale Princes and we’d seen a lot about her in the previous few weeks around Austria. Apparently a real glam and a bit obsessive about her looks. A bit of a sports and diet junkie. 21 inch waste they say. She wouldn’t let anyone photograph her after the age of 32 and would only have portraits from then on. Certainly a very charmed life and looking at her Summer Palace, she was quite the Royal. Sadly when she was 60 in 1898, some lunatic with a grudge stabbed her to death in the heart……….Royalty was teetering globally at that time in history and luckily Mrs Queens (Windsors) lot survived.

A particularly beautiful Boulevard below. I couldn’t possibly refer to it as a street. 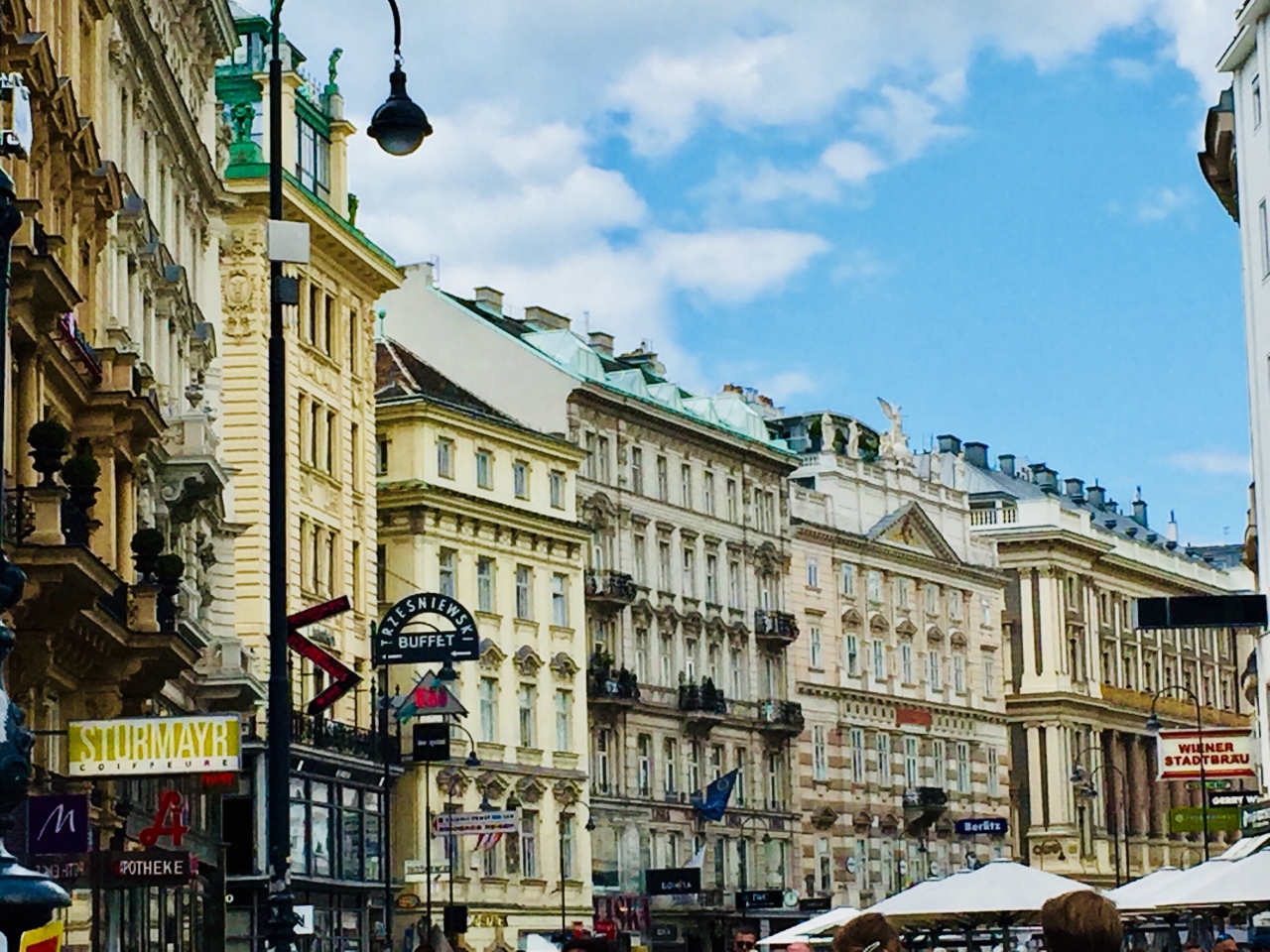 Austria , home to Swarovski .. there were two stunning stores we passed and viewed some gorgeous pieces. Daniel Swarovski was actually born in Bohemia in the Czech Republic. His father was a glass cutter and owned a small glass factory. Daniel served his apprenticeship there becoming skilled in the art of glass cutting .. We passed through a couple of interesting glass factories while we were in the Bohemia region of the Czech Republic and could not find a place to park Pinot , so this little bit of history behind Swarovski was very interesting………..for Amanda 😉

The stunning St Stephens Cathedral which was started in the 12th century. One of the main attraction of Vienna.

another lovely square , no idea where this was !

Surprisingly quiet for a Sunday afternoon and apart from the bloody teeth chattering cobblestones, an easy cycle around theCity.

Maria Theresien Platz a large public square that joins the ring straude with the museum quarter. There are so many museums in Vienna to suit all tastes and budgets but we are pretty well done visiting museums so I am more than happy to stand on the outside now and enjoy the buildings !

Vienna’s Trevi fountain ………..not quite. Not a clue what it’s about but Amanda wanted a photo, so who am I to argue.

This monument below was quite moving. A hunched over figure of a Jew being forced to clean graffiti of the wall with a toothbrush reminds Austrians of the consequences of not keeping their Government in check. To add greater emotional impact, the monument sits on a pedestal of granite cut from the infamous quarry at Mauthausen Concentration camp, and sits on the spot where several hundred people were buried alive when the cellar they were hiding in was demolished in a WW2 bombing attack. All very moving 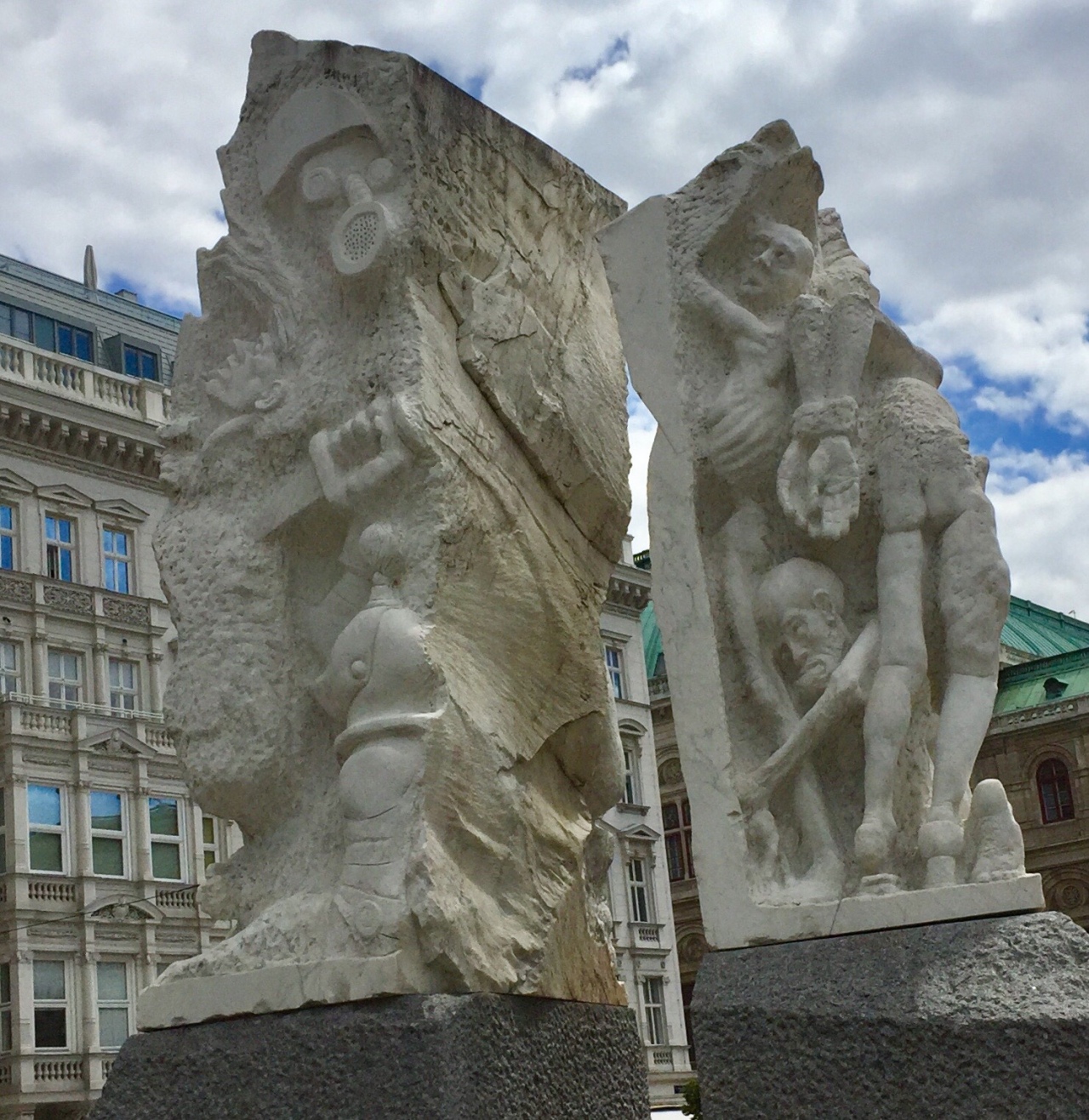 We thoroughly enjoyed our very long day doing a Quickstep around Vienna.

Love to all xx