Sailing on the Mary Celeste….Barcelona to Genoa !

We had an easy 30 minute drive down to the Port of Barcelona for a rendezvous with the ferry, Oops I mean SHIP for our 19 hour crossing to Genoa in Italy and I woke hoping the sea would be kind to us. Amanda really wasn’t looking forward to this in a little ferry ( aka humongous ship of gigantic proportions.

See Amanda, I promised you it was a ship…..a little ship but a fair dinkum Ocean going SHIP

its an Italian ferry/ship and so as not to disappoint us the ferry/ ship was of course running late, but surprisingly after a lot of hanging around, they quickly herded the cars/motorbikes, motorhomes and all manor of things in wheels into a holding pattern and got us loaded (backwards) I love reversing up a ramp and down into the gunnels of a sea going ginormous thingy. Prior to our departure there was another ferry loading for Tangier and the cars and vans were absolutely overloaded with everything including the kitchen sink atop their pretty bodgy looking vehicles…I assume it’s Moroccans buying cheap odds and sods (old bikes seem to be very sellable in North Africa) to sell back home. The photo below is only one of dozens ready to board their vessel.

A quick reverse and hey presto sim sala bim and bingo we are on.

Now for those of you (both of you) who read the previous post, I promised Amanda I’d booked a cabin, so with fingers crossed I opened the door to the cabin……she’s still smiling, small but perfectly formed with 2 singles and a nice clean ensuite. 😜 I never doubted it would be Ok, fair enough it’s not the QE2 but for €305 it’s pretty damn good.

What I had omitted to tell Amanda prior to weighing anchor was that she had been drydocked for 2 years after a little collision…..she’d never have boarded had I shared that little gem. Based on how quiet the ship was, I reckon it was about 20% full, in fact it was like sailing on the ghostly Mary Celeste

Hallelujah, as we left Barcelona the water was like glass and promised to be so for the full 19 hour crossing, so far so good and Amanda is smiling optimistically

A leisurely afternoon aboard and we treated ourselves to dinner in their flagship…..that’s right flagship, not flagferry or flagtanker restaurant and a small bottle of Italian Chianti. My fish was lovely, Amanda’s not so, but hey we got a ship, glass like water and a cabin so 3 out of four will do me 😜 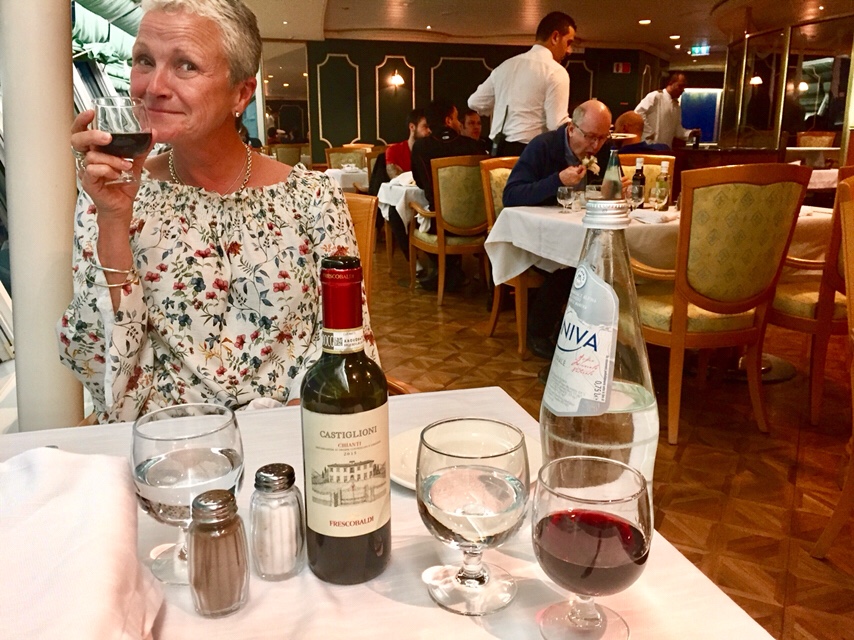 Up at 6 the next morning for a 7.00am disembark…..bloody Guissepi the Dumbass waiter told us the it would definitely be 7

WRONG Guisseppi it was 9 you big goose. We were sat expectantly in the dining room for coffee all alone like a shag on a rock.

Bongiorno genoa and some funky ships….Batman?

Looked an ok City but we ….sorry I wanted to get across and out of Italy before sunset. We’d been to Italy several times on past holidays so buzzed 620k across passing Milan, Verona and Venice without so much as a sideways glance……

All in all quite an easy trip and all done on the Toll road. A very reasonable €42……until we stopped and bought a bloody €30 vignette in Slovenia . A robber in a petrol station told us we needed one to cross the border into Croatia……he saw me coming from a very long way the little bas^#rd. Did we need it ? Did we hell!

Oh, I almost forgot, we stopped in a car park and there was an Englishman parked in his little Moho……WTF it was huge, and was I jealous…..yeah, just a wee bit 😳

So now our little adventure in Croatia begins.