Just a quick post script from the Bangkok leg…

Almost another credit card situation. Now using my card as previously mentioned Allen’s was lost/stolen (still do not have replacements in our hands) went into Chiang Mai and tried to withdraw cash… card sucked into machine and after waiting anxiously for 5 mins transaction was cancelled but no cash. Reluctantly went to another atm and tried again this time it ate it completely! By this time I am about to vomit and freaking out! Luckily was attached to a currency exchange counter with a cashier present, who must have thought who is this crazy lady crying the machine has eaten my card !!! She was a love and asked me what colour it was etc unlocked the machine and gave me my card back Phew soooo lucky !!

Anyway now onto Abu Dhabi : a quick 2 night / 3 day stopover. Arrived mid afternoon from Bangkok and after checking in we headed straight out to explore. A very pleasant 23 degrees perfect for walking we decided to go to Emirates Palace on foot(not with runners on) along the corniche. An hour later getting very hot and a couple of blisters appearing on little toes we arrived at the Palace for a well earned coffee! Only to find out Allen could not get in because he had shorts on Arrrrh! (Didn’t remember that one from last time we were there) not impressed and fed up we jumped in a taxi to the Marina Mall not far away had a coffee casual, an early dinner then bed ….

Day 2 Take two, Allen with his long pants on, off to the Palace we go a luxury hotel that was built in 2005 at a cost of 3 Billion USD the most expensive hotel ever built only surpassed by the Marina Bay Sands Hotel in Singapore.

Ridiculously expensive coffee especially when I opted for the 24 carat gold sprinkles and Allen did not hence his sad face ha ha ( he was sensible).

Without the 24 carat gold sprinkles

After a leisurely walk headed back to the hotel to get ready for our late afternoon excursion into the desert. We were not sure what to expect as the reviews varied but we had a ball! The 4WD drive through the dunes was brilliant even if I did feel a tad sick after ( bit difficult to get a good pic when you are been tossed about so much) Camel ride though short was fun, Henna tattoo ( not too sure about it now ha ha ) loved my Arabian Prince in his attire, Shisha  pipes that I managed not to choke on like I did in Turkey followed by a wonderful Arabian feast and of course the obligatory Belly Dancer completed a wonderful experience. 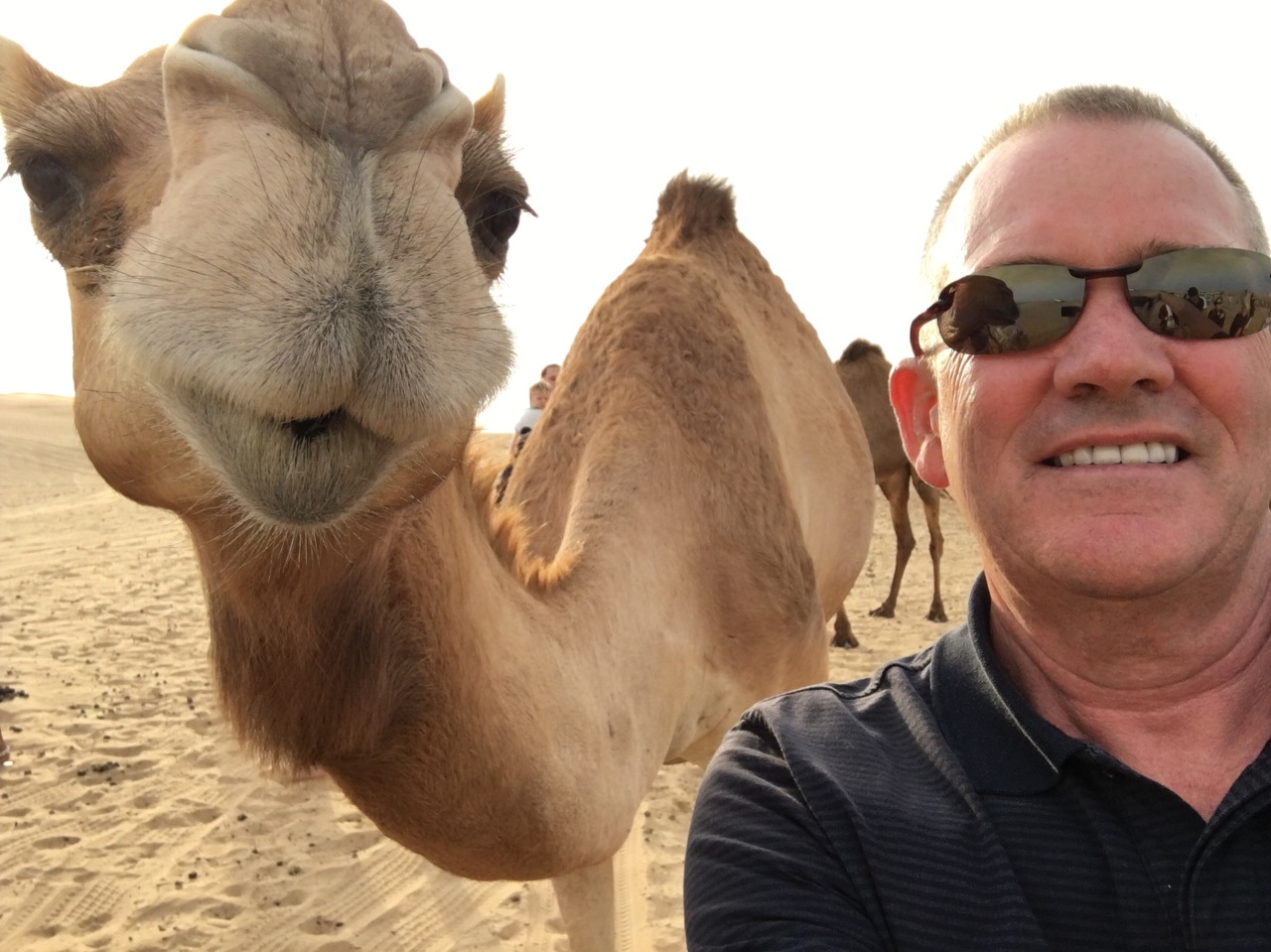 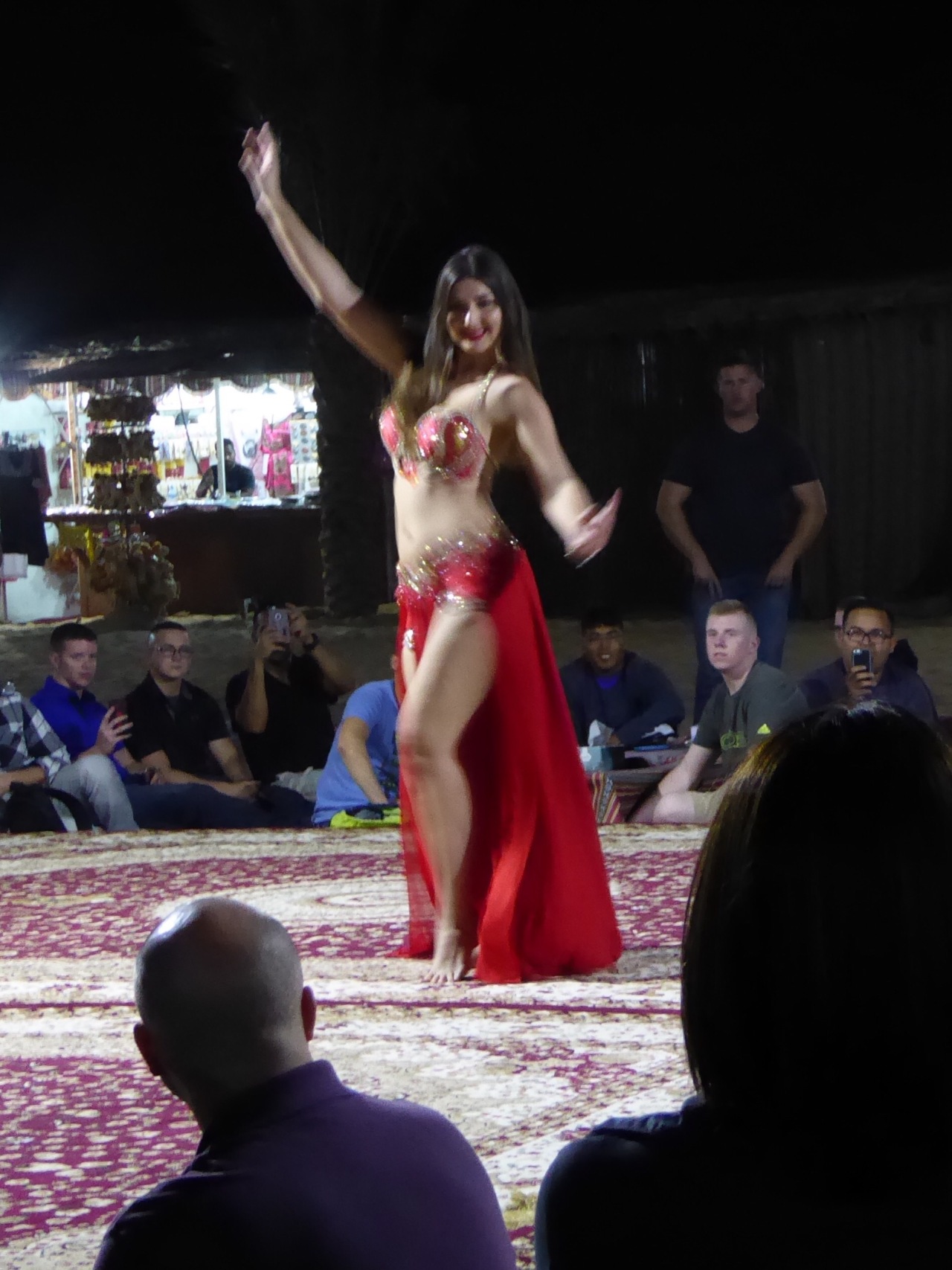 Came back to hotel in time for a Syrian wedding party arriving for their reception, so we were treated to some very loud music and a running commentary from one of the wedding party explaining what was going on

Day 3 ..Flight did not leave till 2.00am the following morning so it was going to be a long day..Had a very long walk in the morning, chilling in the hotel and failed miserably trying to upload anything for our blog ( the internet was woeful in general the whole time in Abu Dhabi) Hotel wanted a ridiculous amount of money for an extended check out, so I found a lovely hotel for a fraction of the price and got to try out another pool and beach. Managed a few hours sleep before leaving for Edinburgh. Would have loved to revisit the Grand Mosque which is just exquisite but it was closed the day that suited. In all a wonderful 3 days inthe UAE