Crusin…… 😎😎 in the West Indies and Bahamas 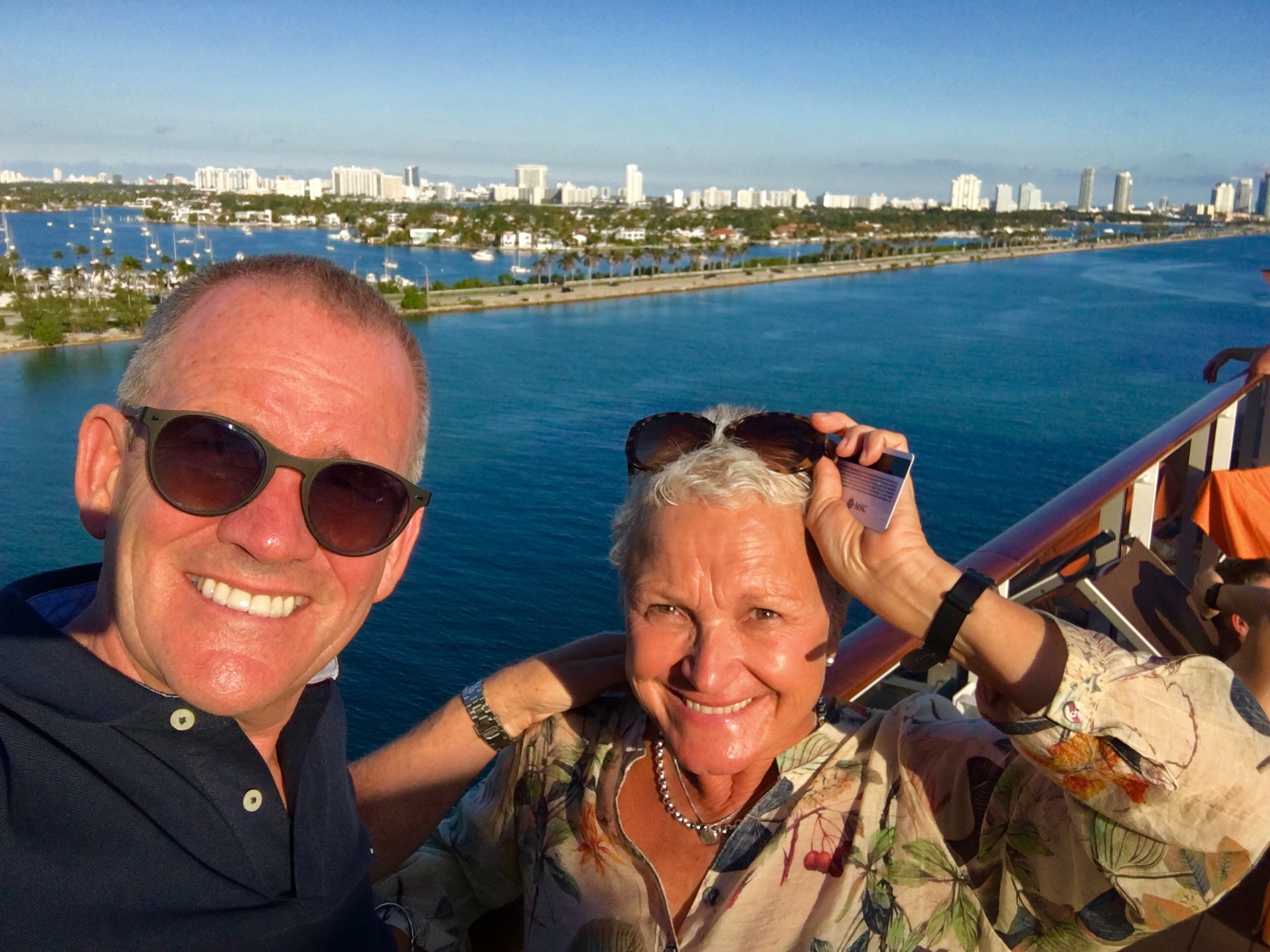 Throughout this journey, the most taxing decisions we have had to make is “where to now “, head North or South…East or West, or shall we just stay put for another day or so? This happens to us a lot in Pinot and adds to the beauty of being independent travellers. As we have mentioned before we had loose plans to drive down to Key West etc but the devastating cyclone Erma a couple of months ago has caused quite a lot of damage there so before I knew it Al Pal had seen a great deal for a 7 night cruise to the West Indies and Bahamas and clicked BUY it. 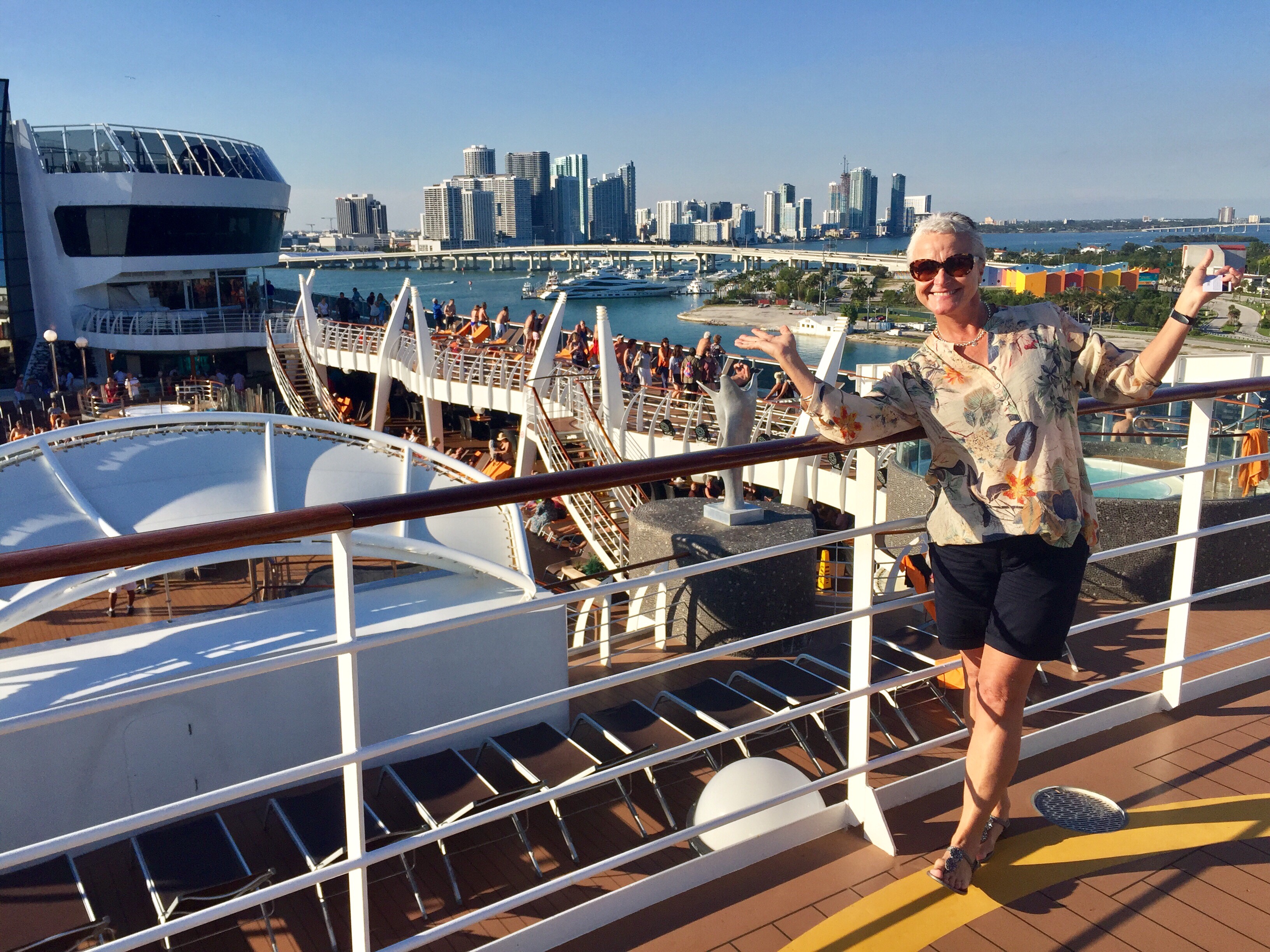 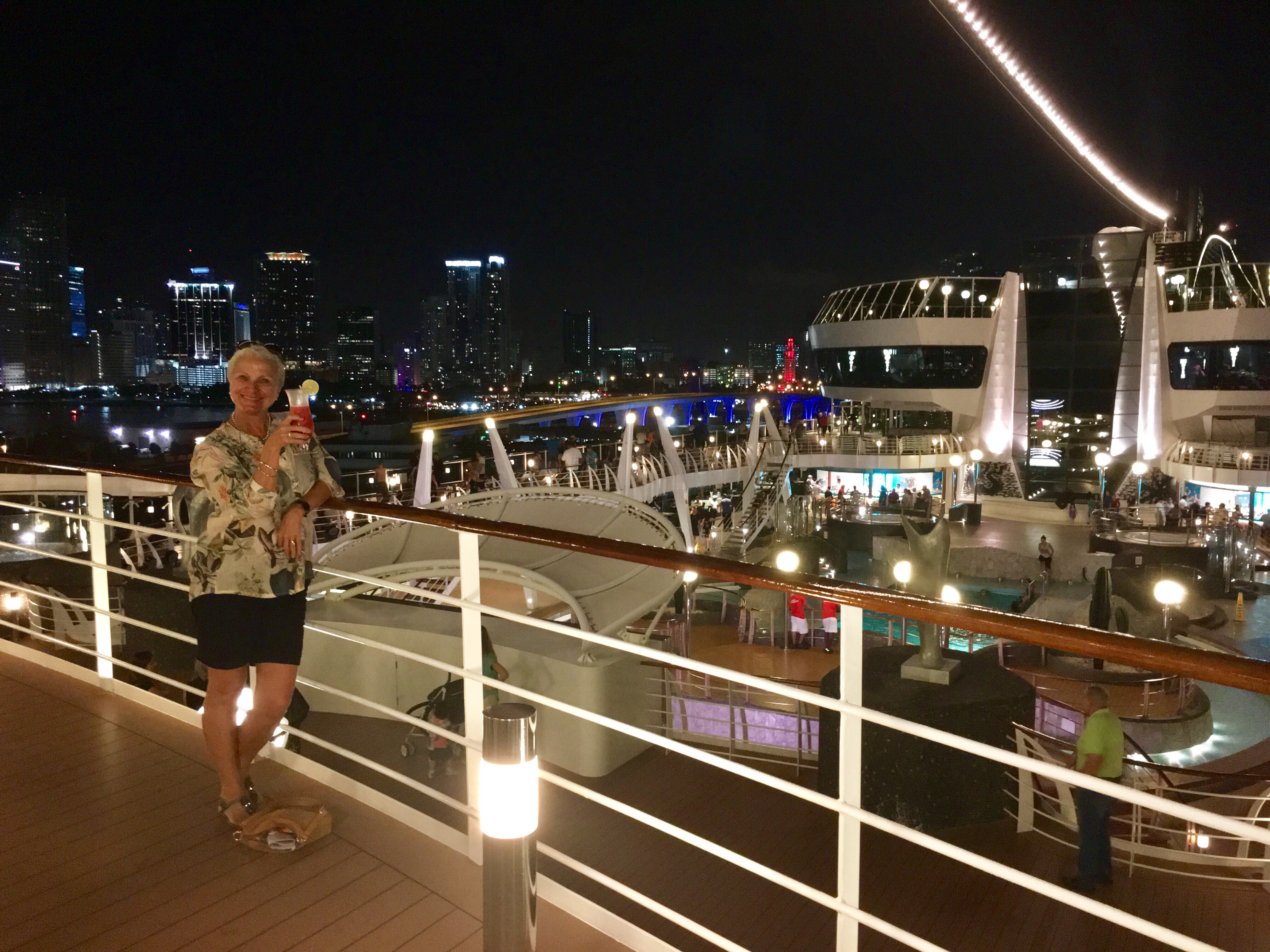 When Al had booked the first cruise my first thought was eek !! I don’t have cruise clothes with me but cruising these days is not as formal as in the past and if you don’t want to do the formal dress up it’s entirely up to you, thank goodness……………… ! Believe me, Amanda has done her fair share of shopping during this adventure , so other than a tiara and long evening gown, she is good to go 😂……….(Formal nights on the transatlantic cruise were super swishy, where as this one was much more low key ) sorry back to the script ……We had plenty of time before we headed back to Europe so 48 hours after booking this cruise we caught a taxi to downtown Miami harbour and we boarded the beautiful MSC Divina an Italian ship proudly launched and dedicated to the beautiful Sophie Loren in 2012 …Wow …full on glitz and glamour 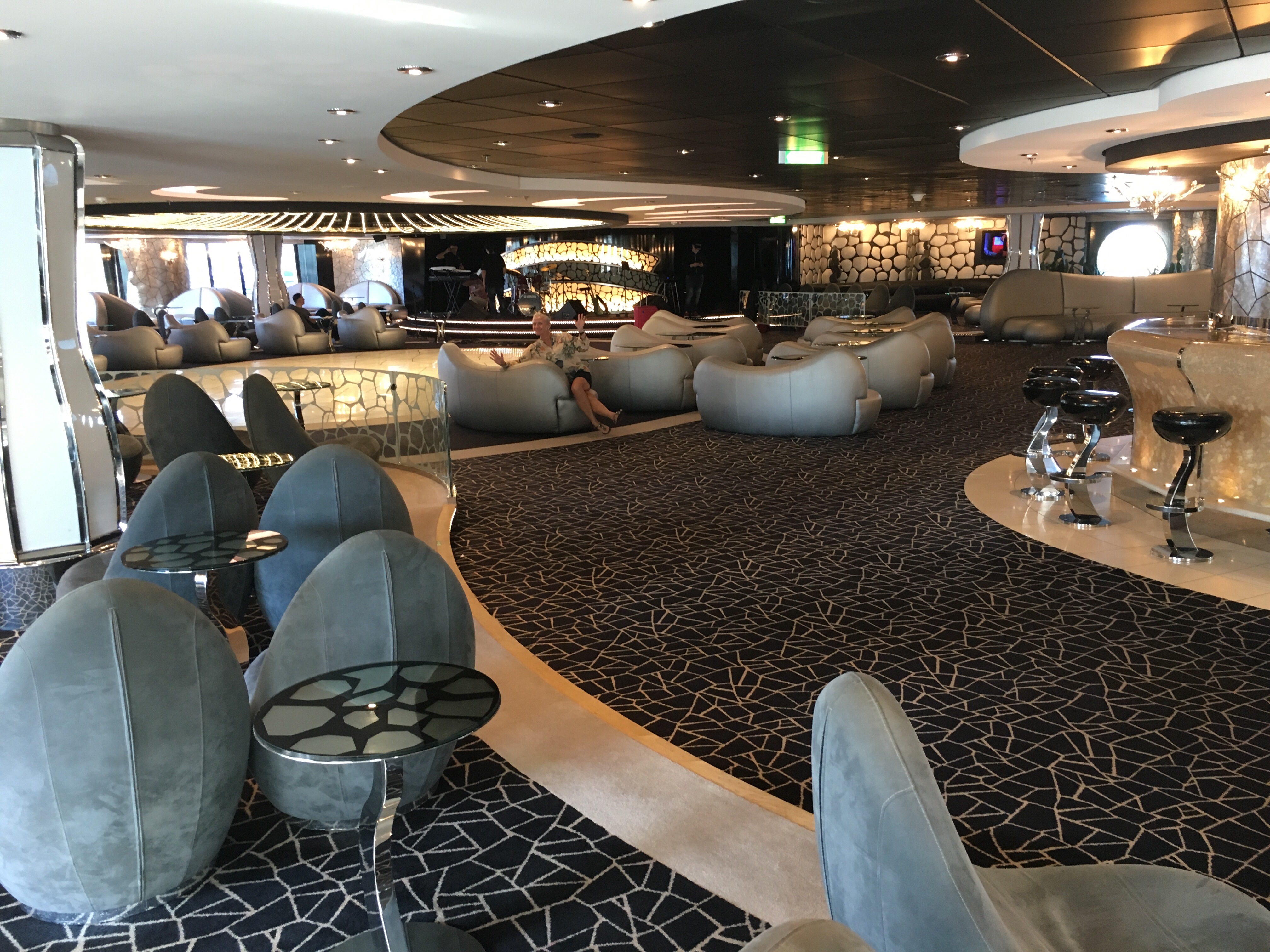 a bit too glitzy in some areas but beautiful. 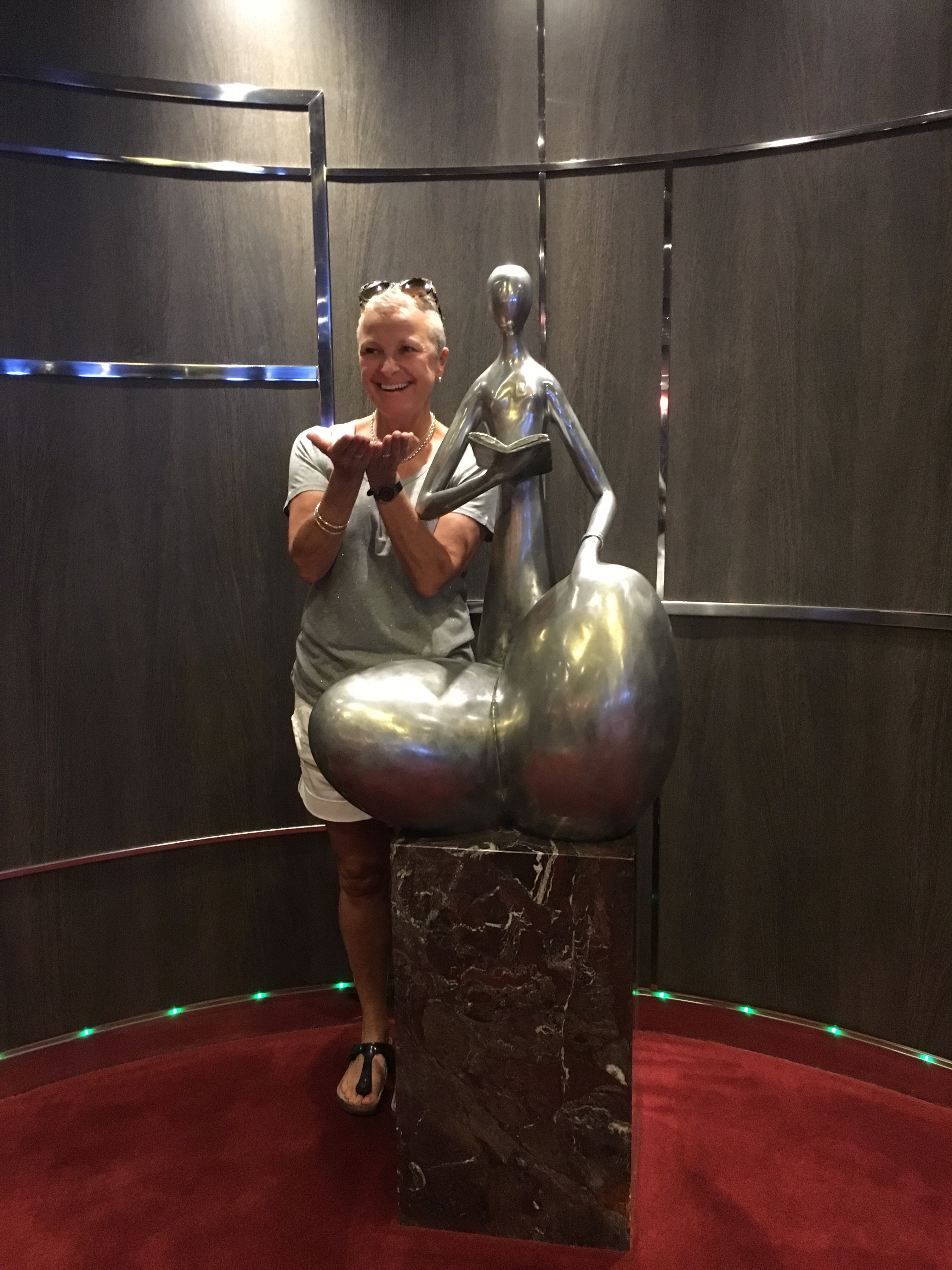 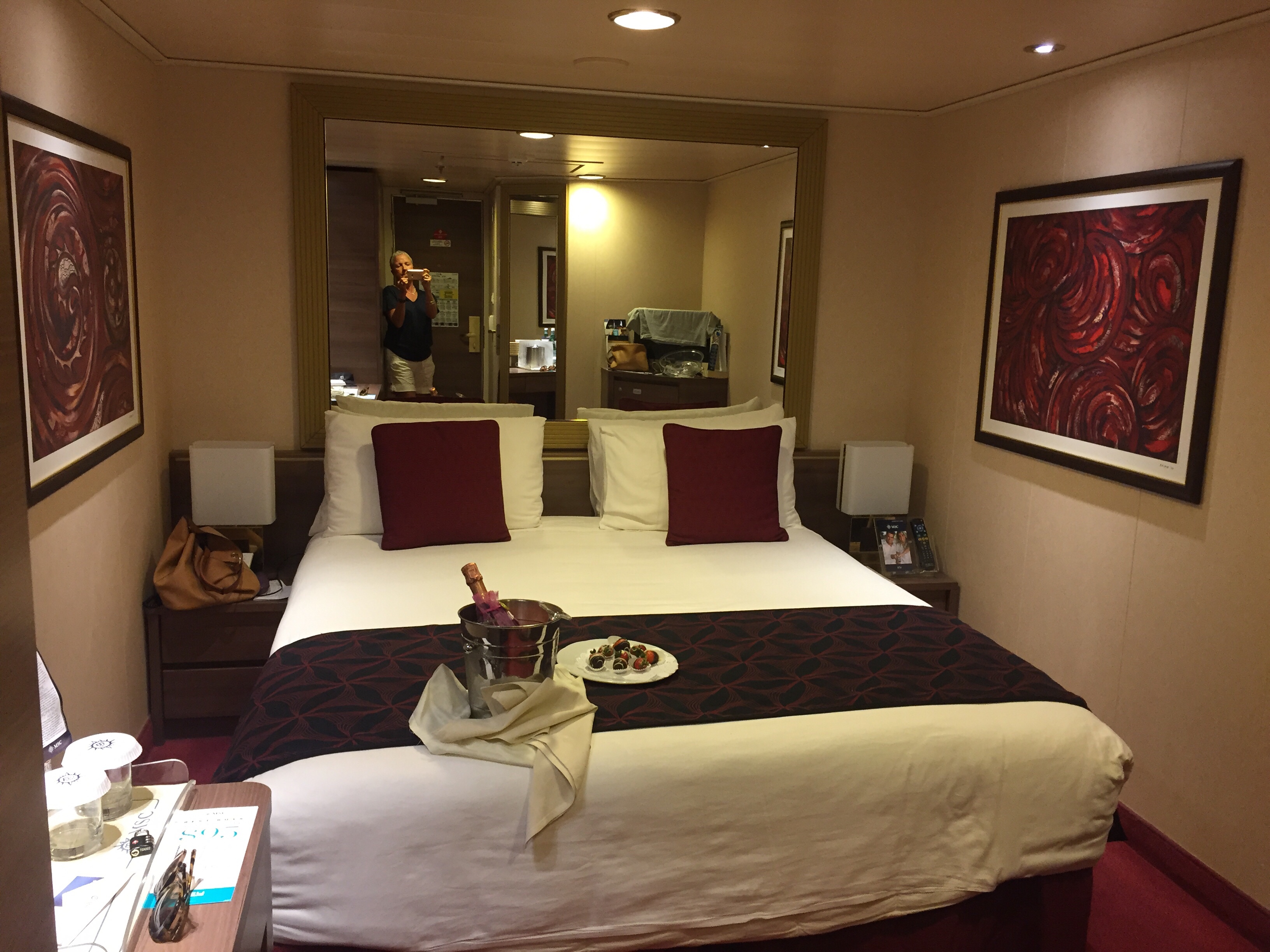 Fellow passengers are mixed, lots of young couples, middle aged and beyoand a few children on board as it is not school holidays. The shows are fabulously energetic and very colourful

with a little splash of Opera now and again ( again, the Italian influence) … why is it the Welsh and Italians all consider themselves tenors haha .So many lounges with live music and the usual trivia, talent shows, casino, lectures, dance classes etc there is something for everyone. Speaking of Trivia quizzes , we had just sat down in one of the lounges for a pre dinner cocktail and a young woman dropped a quiz sheet on Amanda’s lap and boom we were entrants in a quiz. They played a bar or two of a Beatles song and you had to write the title. I’ve had one foot in both the Beatles and Stones camp but clearly Amanda is a closet Beatles fan. So 20 minutes later we had 16 out of 16. Along with 2 other entrants. A good effort as there were 26 entrants. So they asked for 1 person from each team to go on stage for a tie breaking decider to win the bottle of Champagne. I nominated Amanda as our team leader and pushed her forward ( very gallant of me) each of the three had to sing part of “twist and Shout” then the entire lounge chose the winner. Amanda not only sang, she did the twist as well ……what a girl 😘anyway a very loud American guy with a raspy voice got the vote ( 90 % of the guests are American) and Amanda was robbed and given second. ……………Food wise …. groan … more food ..on no. The menu isn’t as diverse as the Transatlantic but there is certainly enough variety to suit most tastes. There are certainly enough larger people on here getting there monies worth and of course it must be their thyroid which makes them queue for the chips hamburgers, hot dogs and donuts in the Buffet areas. (we are now more on American menu).we chose to eat more in the a la carte restaurants where it wasn’t as hectic. We have once again been very lucky and are seated with a great bunch on our table for dinner and with a few comedians including Al Pal there is always lots of laughter going on… another naughty table. Thanks to Christine and Joe from Northern Ireland for your sharp wit and tips on driving around Ireland. The lovely wacky Essex girls, sisters Carmelita, Karen and Joyce were a hoot and mad as cut snakes. Thanks to you all for making dinner so enjoyable😂

Our first port of call was St Johns in Antigua, 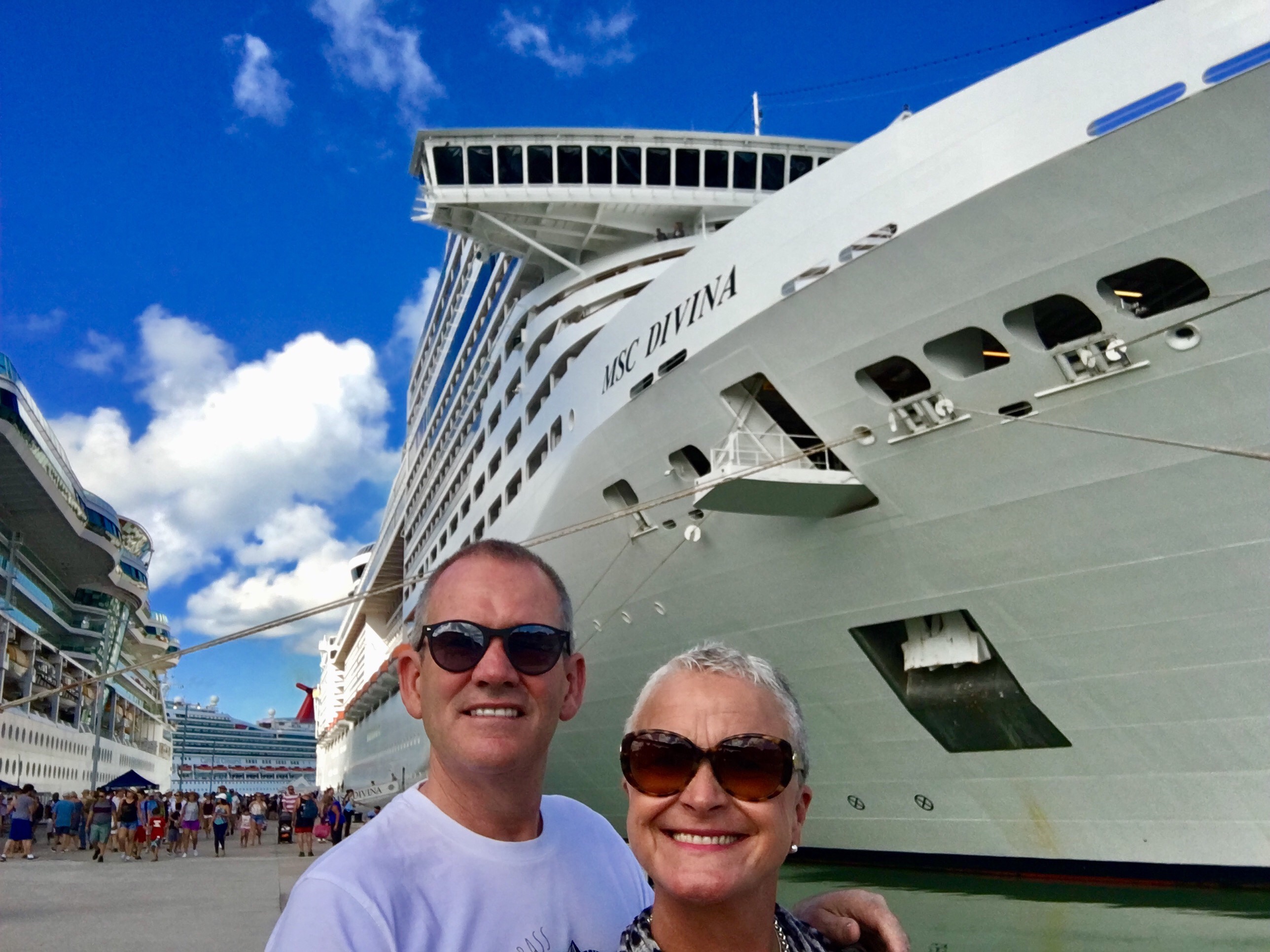 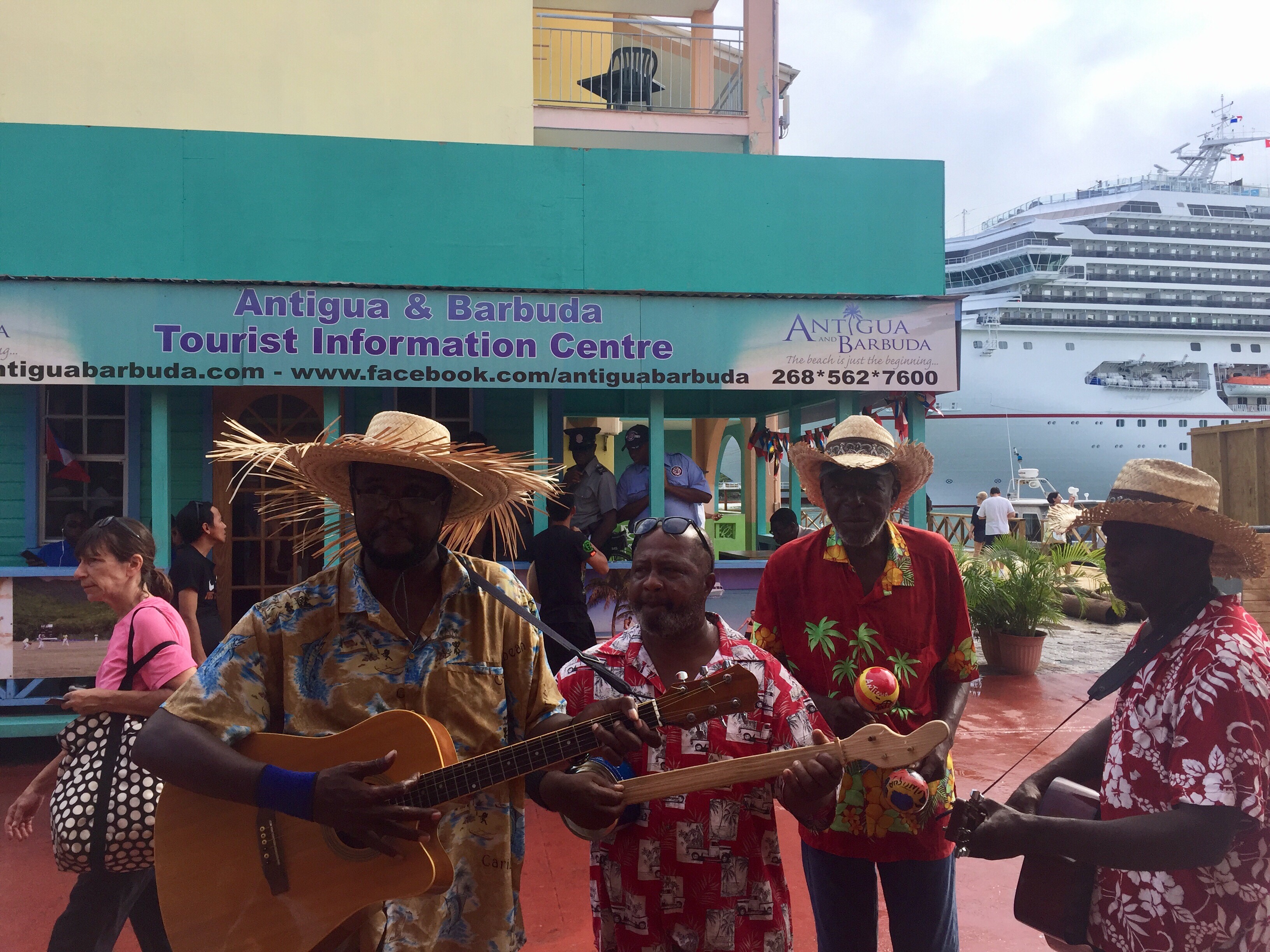 West Indies. we decided to take a bumpy island tour hosted by the lovely (clean living) but high on weed Eddie.

We learnt a lot about his homemade natural juices which he was selling onboard for 5 US a pop … Al tried the ginger beer and said it was delicious .. I passed on the experience just in case. (When Al Pal started singing to everyone on board and thinking he was Bob Marley I was glad I hadn’t tried it ) 🤣😂 …..jokes ….St Johns itself is a bit of a shanty town ….famous for its rum…….cigars…and home of cricket legend Viv Richards, surprisingly the islands first love is soccer . the island is very green or at least it is now, following Hurricane Erma and am we are sure if we have had more time there was lots more to see and learn about the colonial past. cyclone Erma only brushed the tip of the island which was very fortunate, but its Island neighbour Baruda was not so fortunate and at least 90% of properties were either destroyed or damaged sadly. The tour was really an Eddie biography but lots of fun along with 18 Colombian doctors who were in party mode and

sang most of the way. 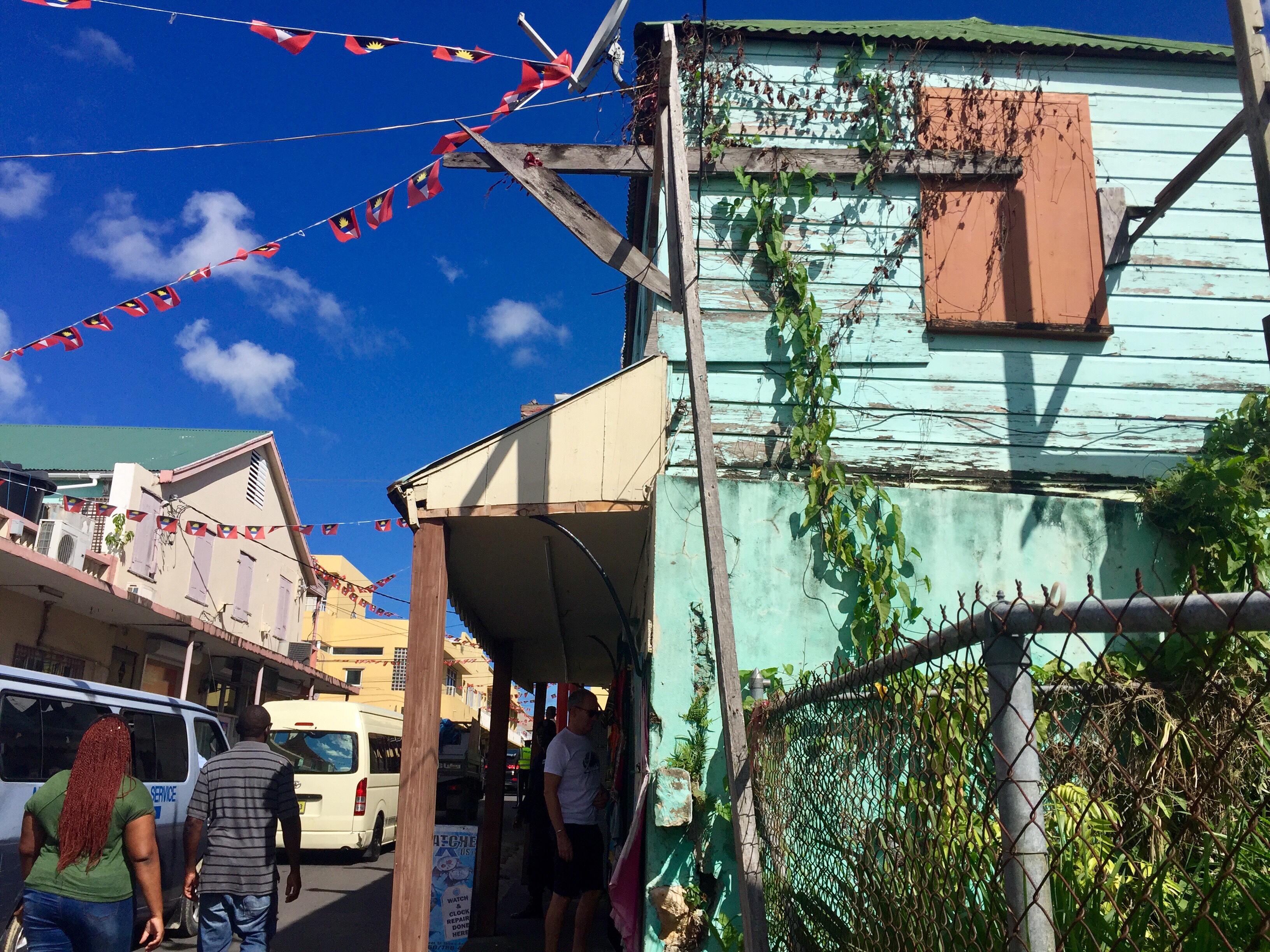 The island boasts 365 beaches, this was one of them..the water was crystal clear and warm. 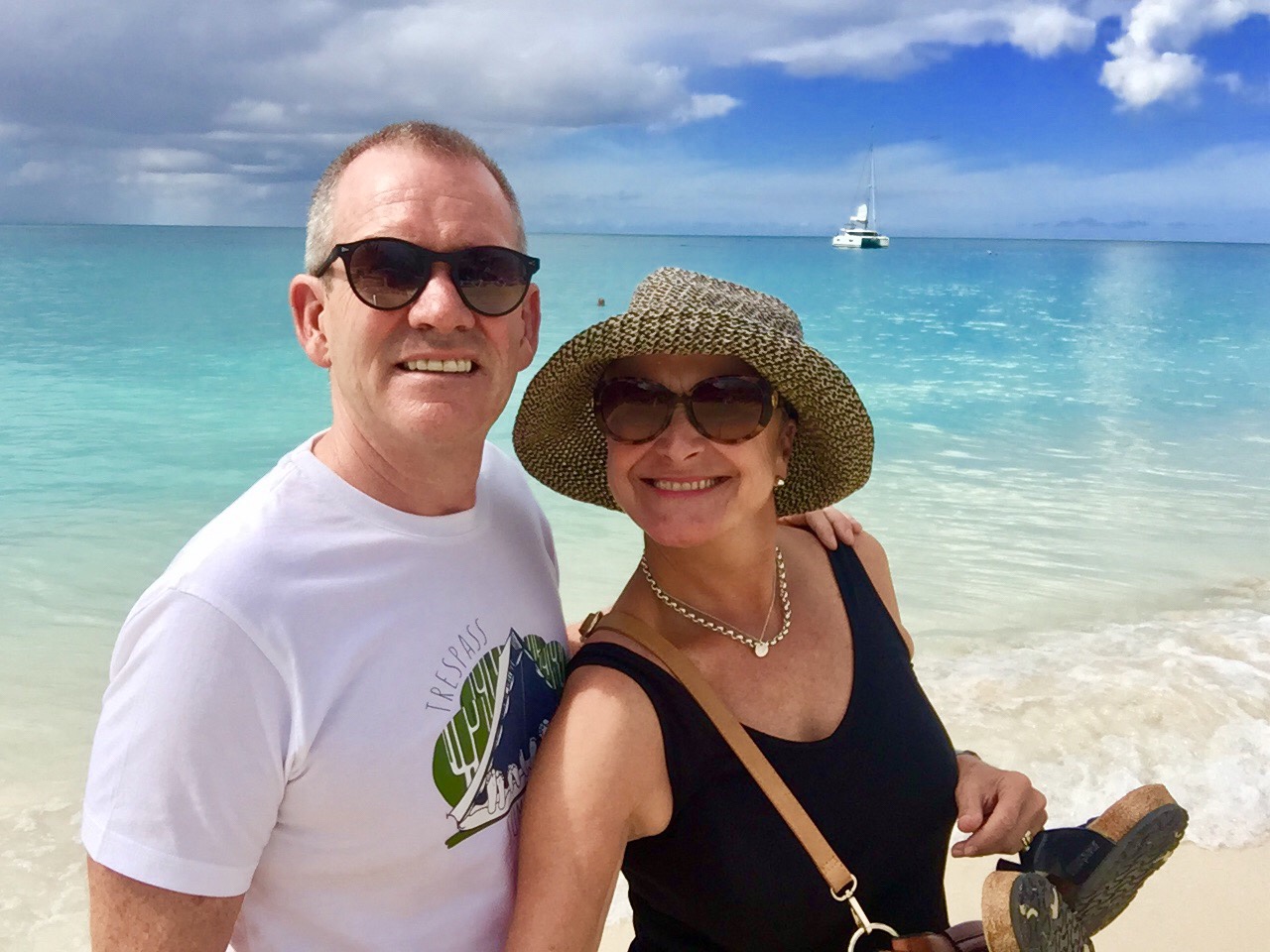 Next port of call was Charlotte Amalie, St Thomas, part of the United Virgin islands in the eastern Caribbean just south of Hati.

It was discovered by Christopher Columbus on his second voyage (the first time he did not stake a claim ) and was established as a trading post by the Dutch West India Company in 1657. 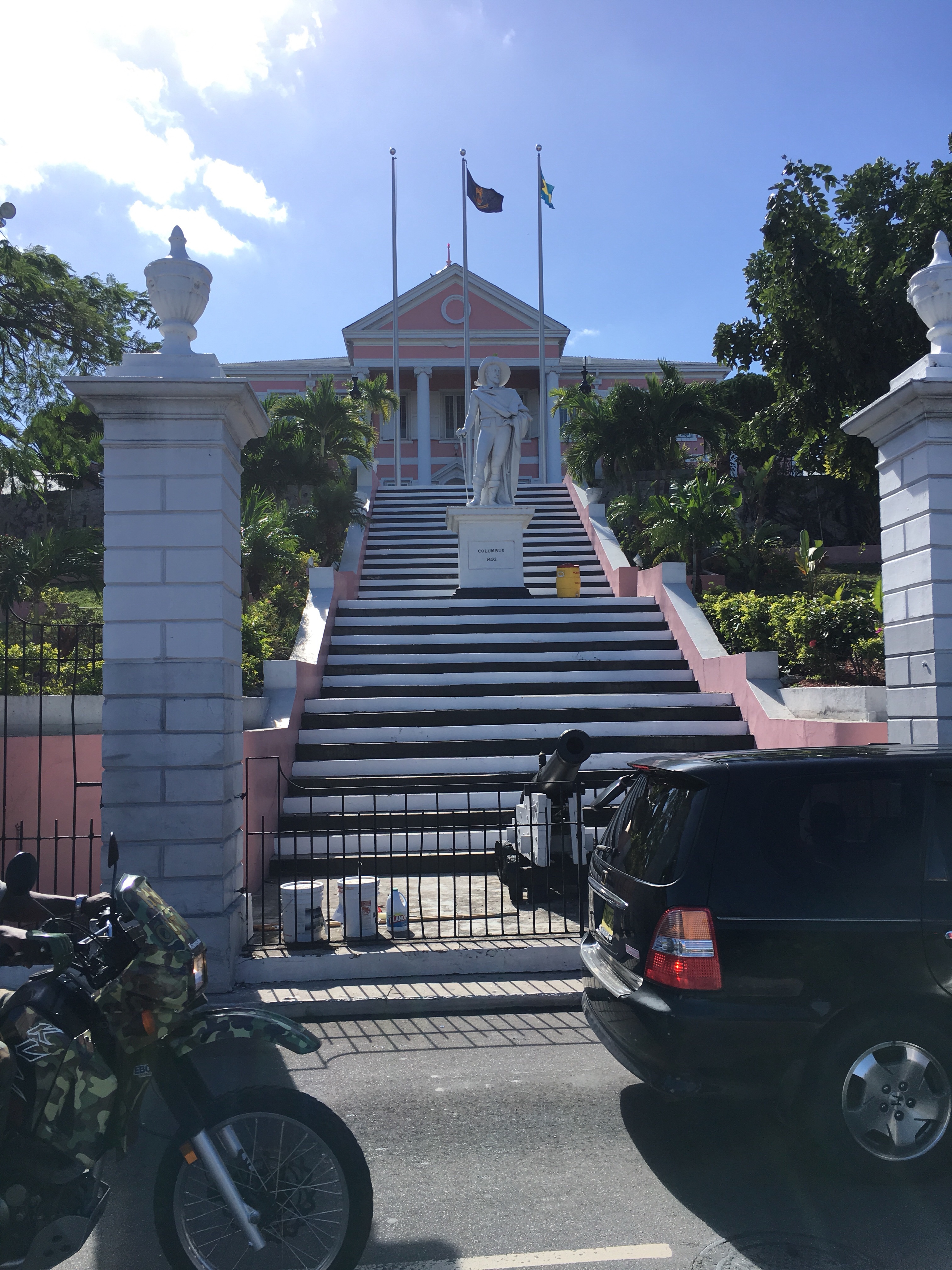 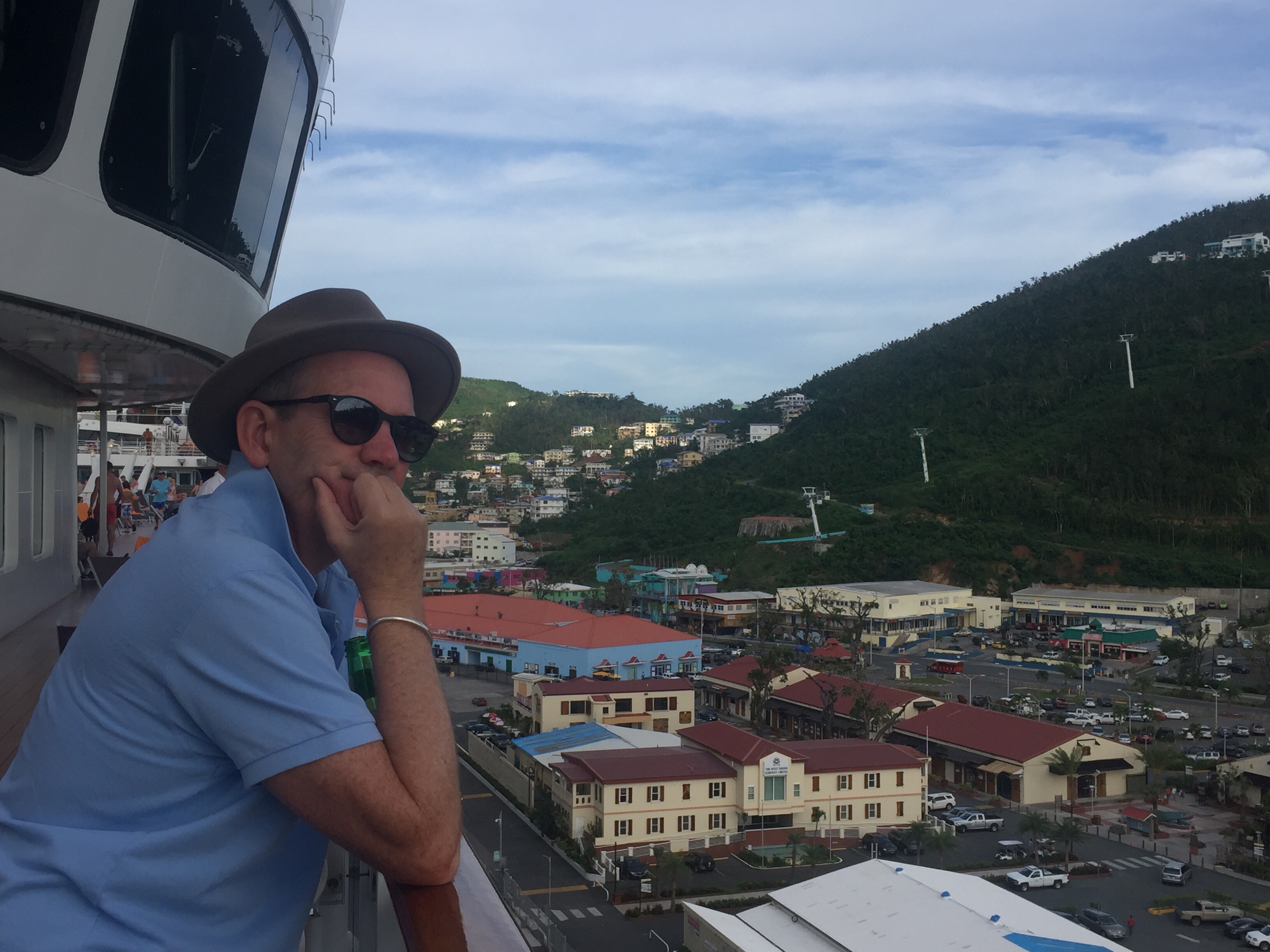 Sadly this island did suffer a lot of destruction but seems to be bouncing back quite quickly … and they are thankful that people are coming back to support their economy. After our experience on the previous tour we decided to do our own thing .. had a wander then caught a taxi to a lovely secluded bay where we had a swim and a lovely lunch. No weed in sight ….. 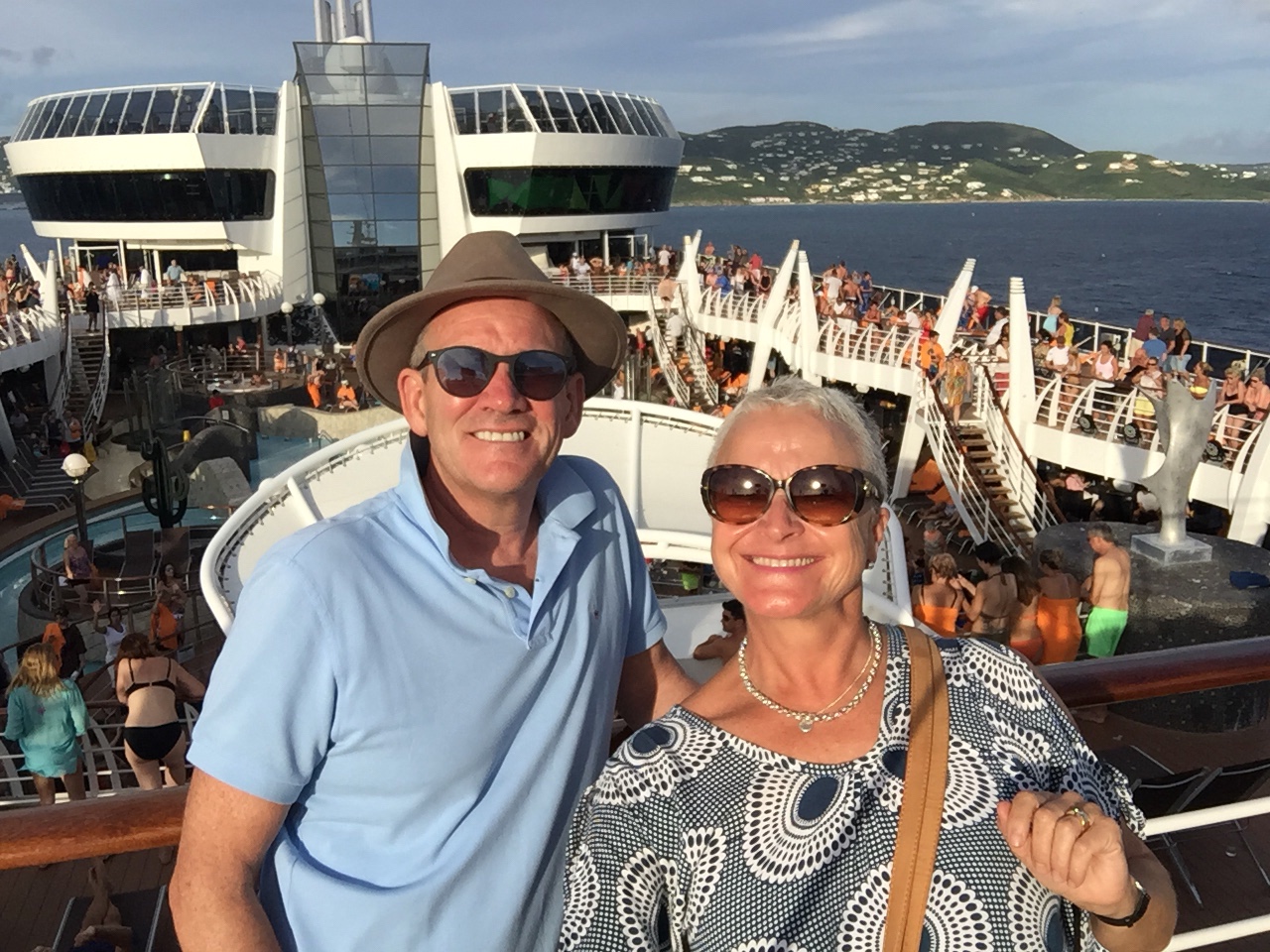 At sea …..the next day Al Pal called me a traitor as my hair was becoming a bit wild. I know it’s short but it needed it trust me. I made an appointment on board ship in the salon ….All I can say is that I am pleased I have my usual stylist with me …. tears in my eyes Al could feel my pain 😢 anyway the senior stylist fixed it up (what was left of it !!😩) and all was well, not really but thank goodness it grows fast !

while on board we celebrated our 38th wedding anniversary ❤️❤️ which was lovely. Al booked a really lovely restaurant on board ( there are a few on board that you pay extra for, this was one of them)

where we celebrated the occasion …..complete with a new pair Ray Bans to replace the ones I lost on a tiddly night in Scotland.

Next port of call was Nassau in the Bahamas, as we sailed into port while having breakfast we knew we were going to enjoy it here.

beautiful turquoise waters … as far as the eye could see. 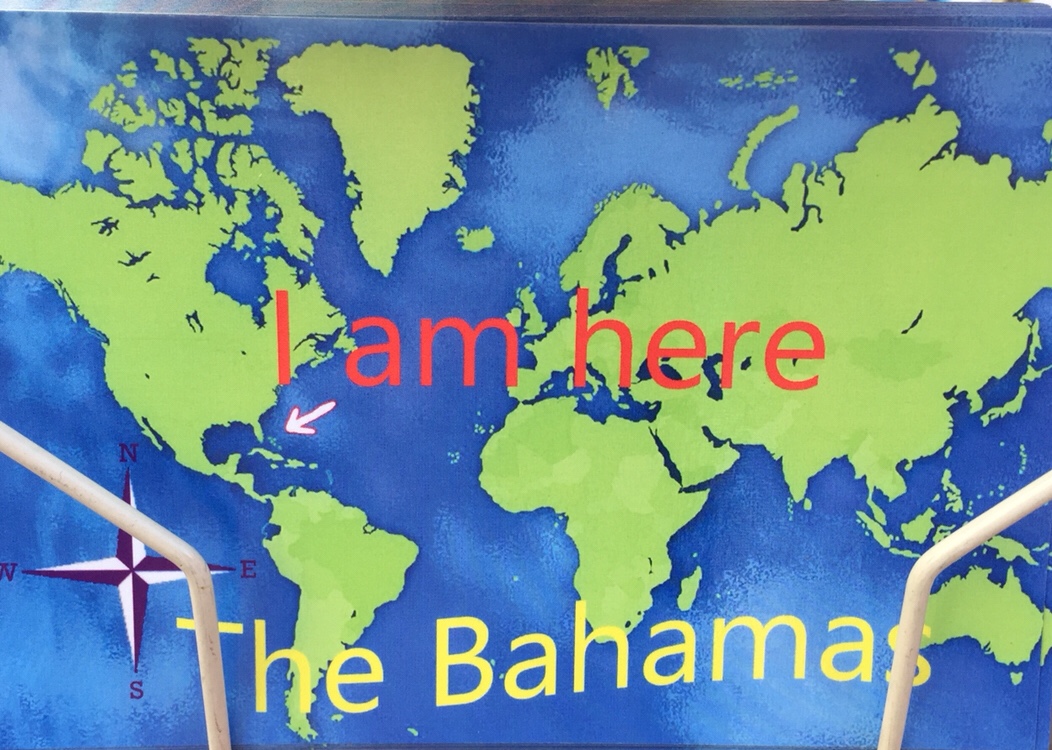 we wandered around downtown first and soaked up the atmosphere

and a few historic sights 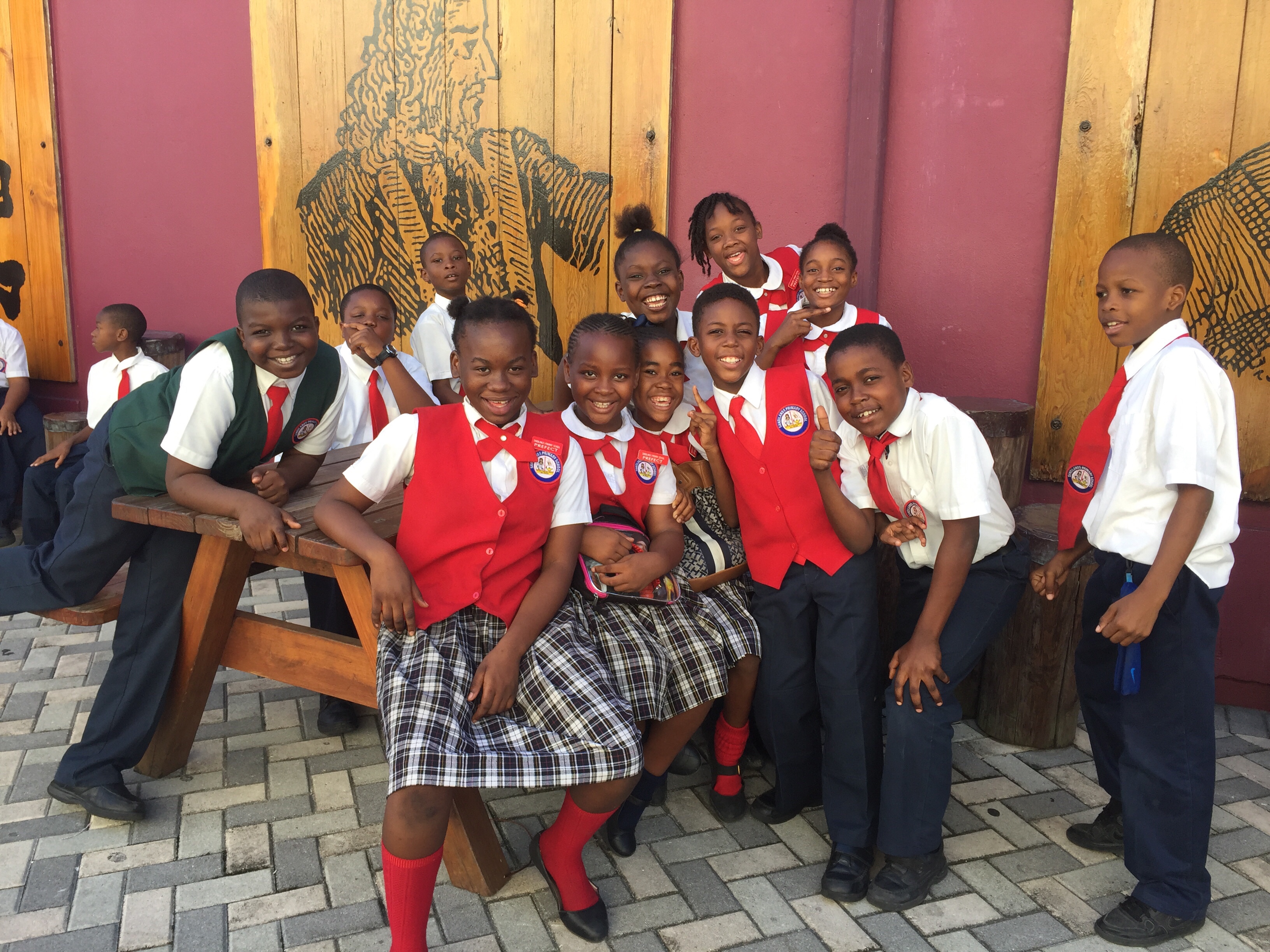 After exploring downtown and its array of cigar bars, restaurants, boutiques, and the obligatory diamond shops … (apparently this is the place to buy them .. we passed … no need of diamonds and seemed too expensive at supposedly very cheap prices). We caught a ferry across to Paradise island. This is a playground for the seriously rich and their big boats. 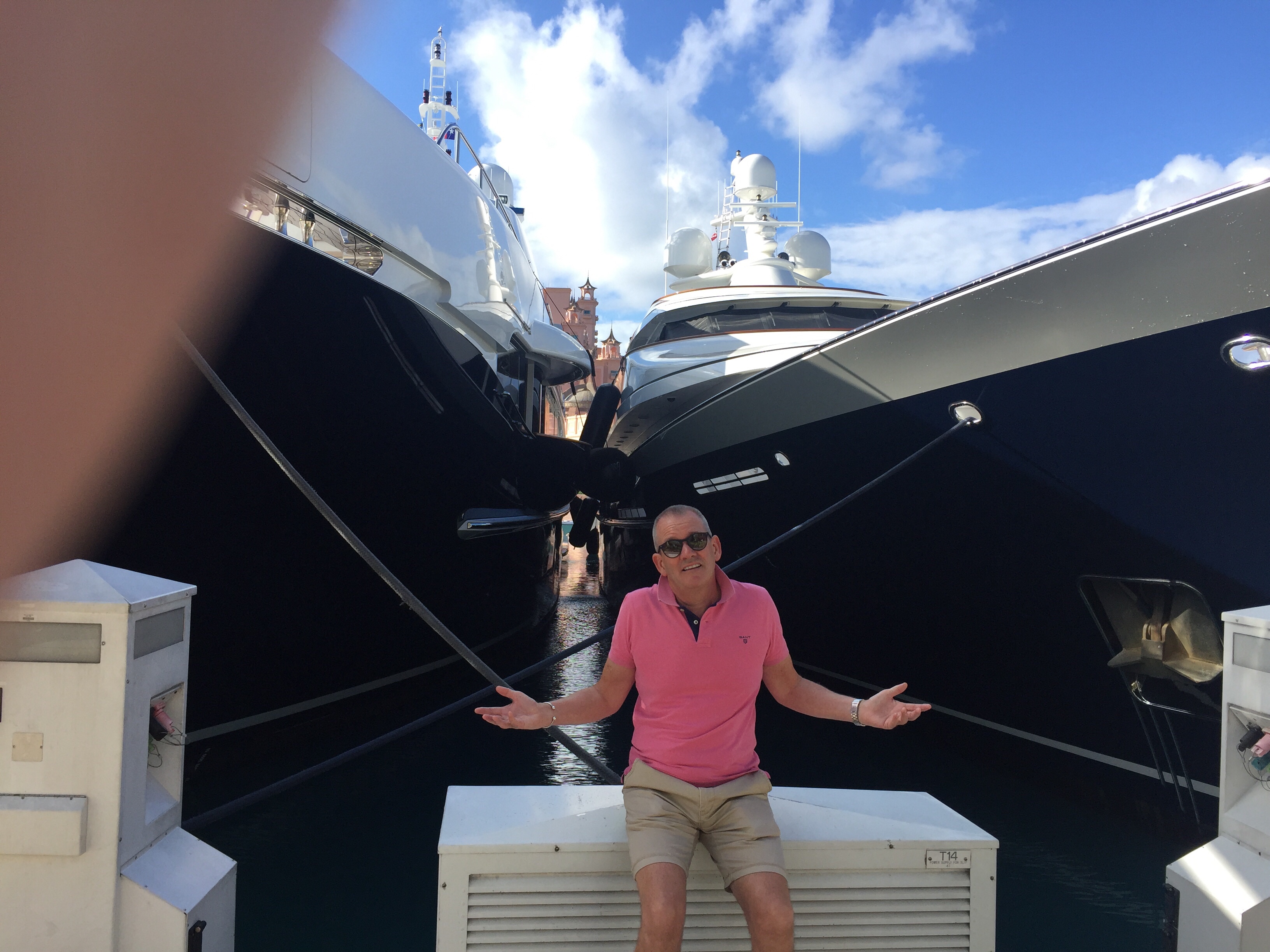 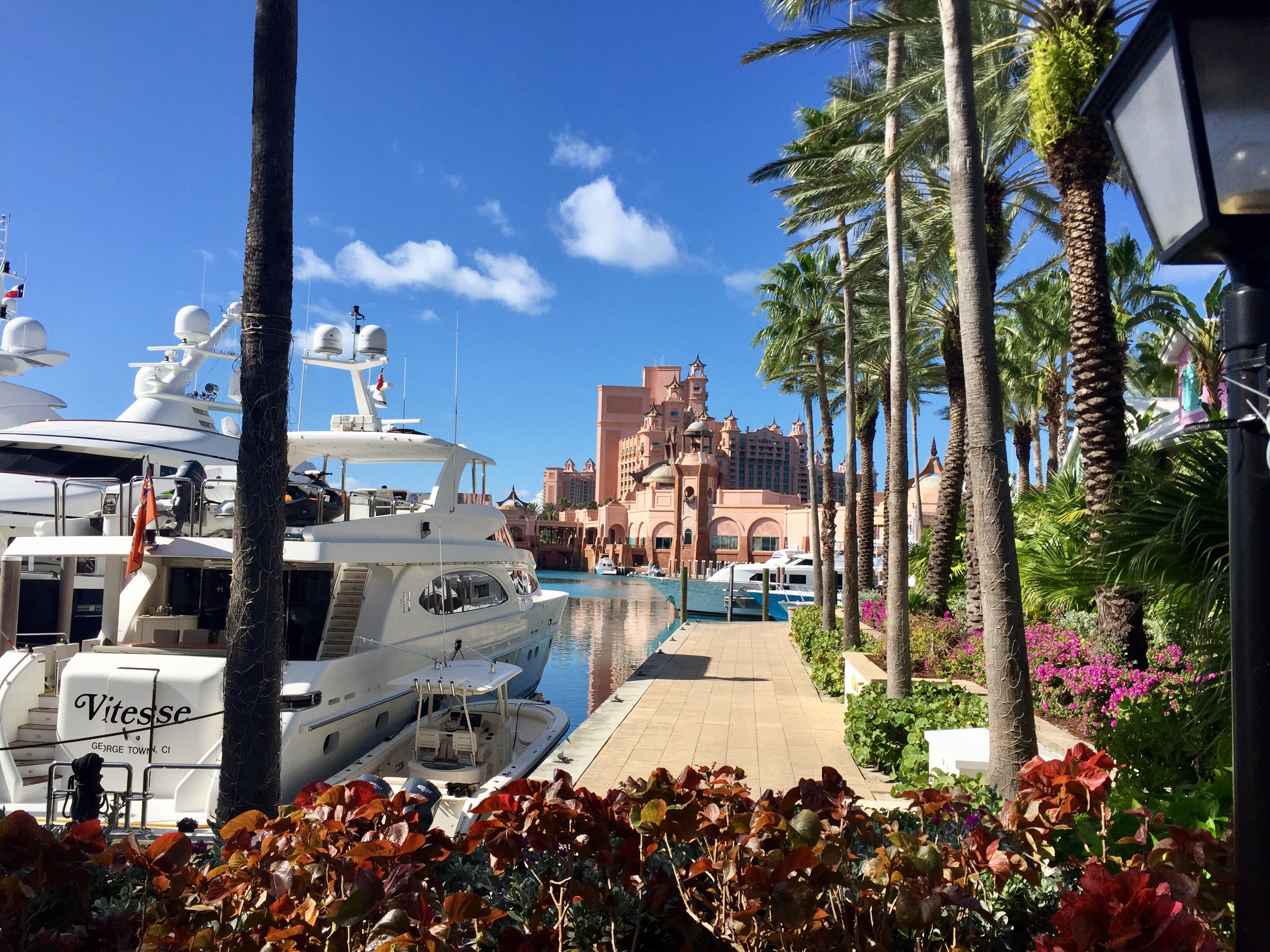 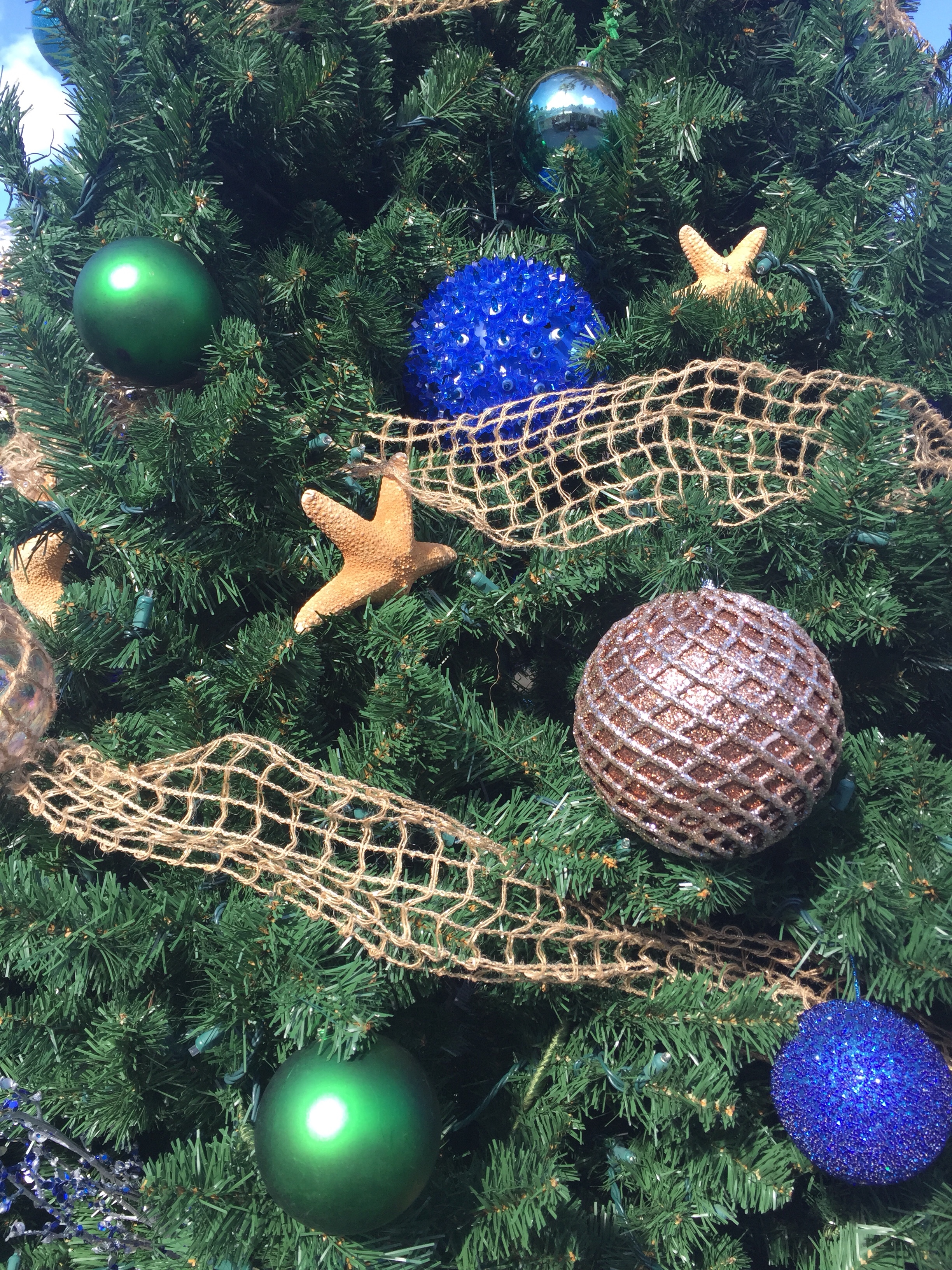 We then carried on through to the huge Aquarian themed resort of Atlantis ..The area above the arch is a cool 25,000 for a large suite with numerous bedrooms a night, before service and tax is added !! 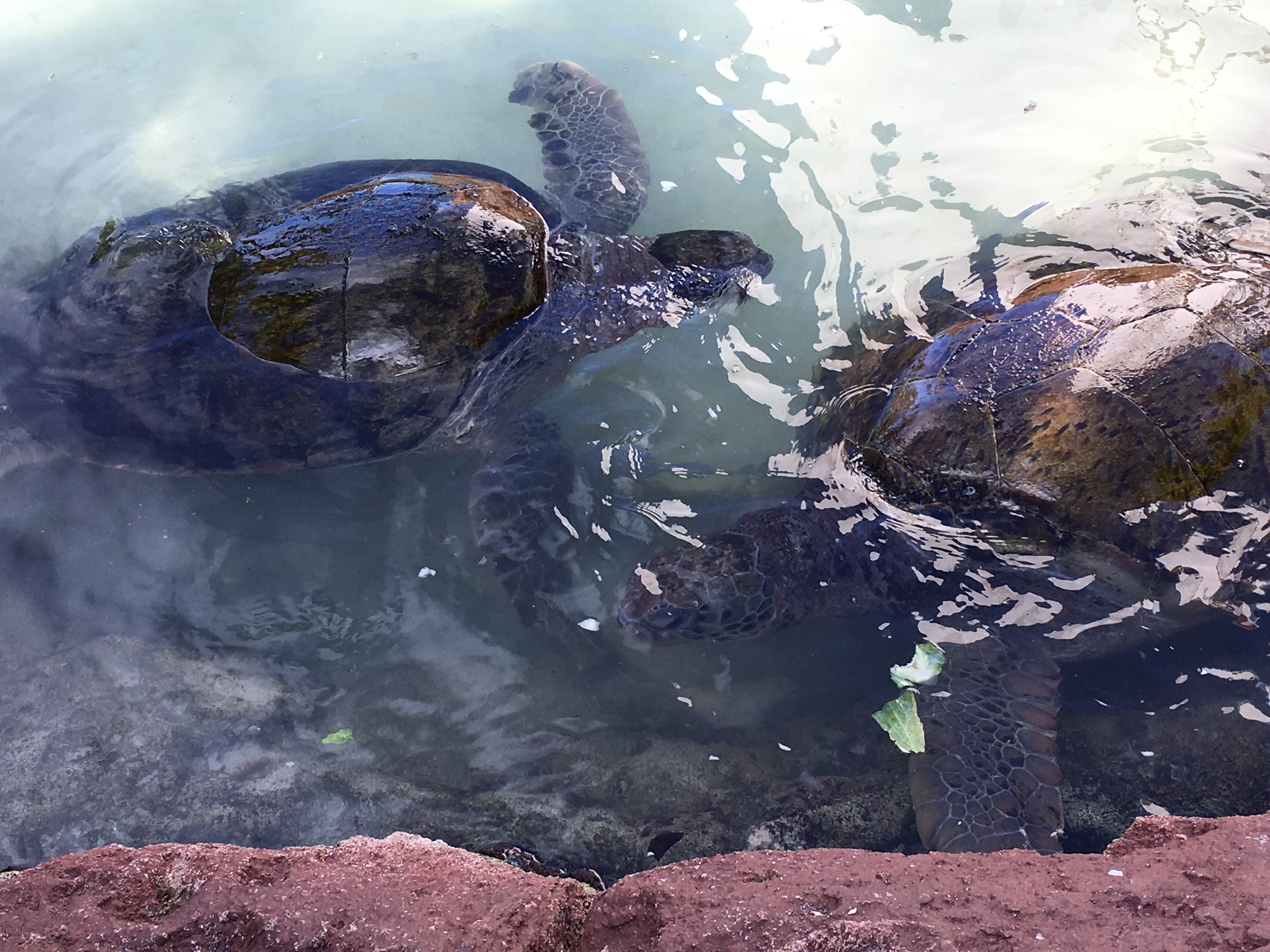 huge lagoons full of sting rays …. (you could swim with them for an experience) turtles and black tipped reef sharks. We walked and walked around this massive resort, quick stop at the beach

Then time to return back to the ship for our final night on board… another fabulous cruise.A few nights back in Miami …in another very quirky art decor hotel. Bought a two day hop on hop off bus pass and explored further than south beach 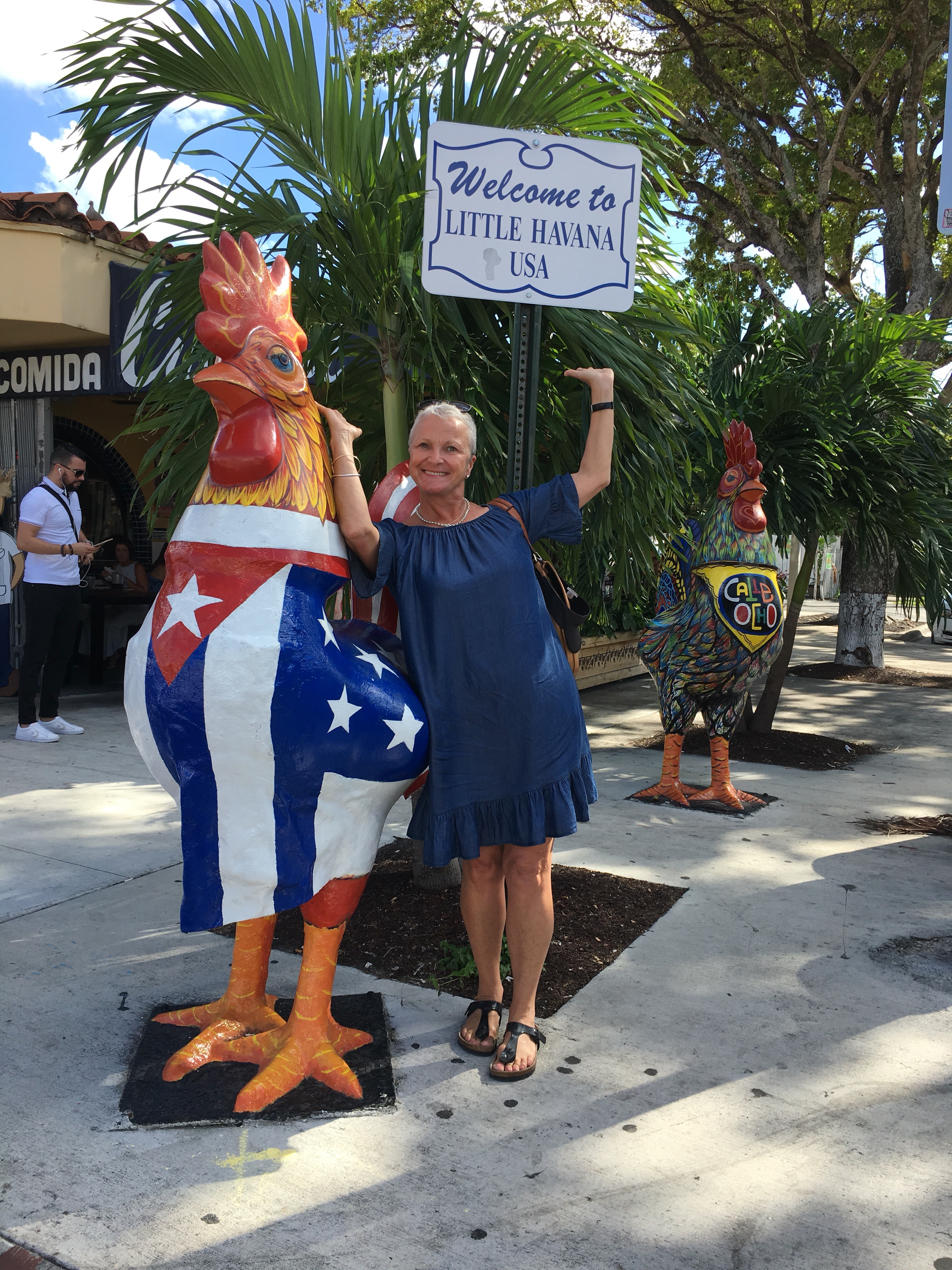 inearly convinced him to buy this 🤣

lunch in a very noisy …. but fun in a Cuban restaurant

then on to Wynwood Walls an outdoor art museum with a huge array of street art, museums, eateries antique shops etc

walks along the beach … seeking healthy food options… (a bit challenging here) and general people watching were order of the remaining time we had here. 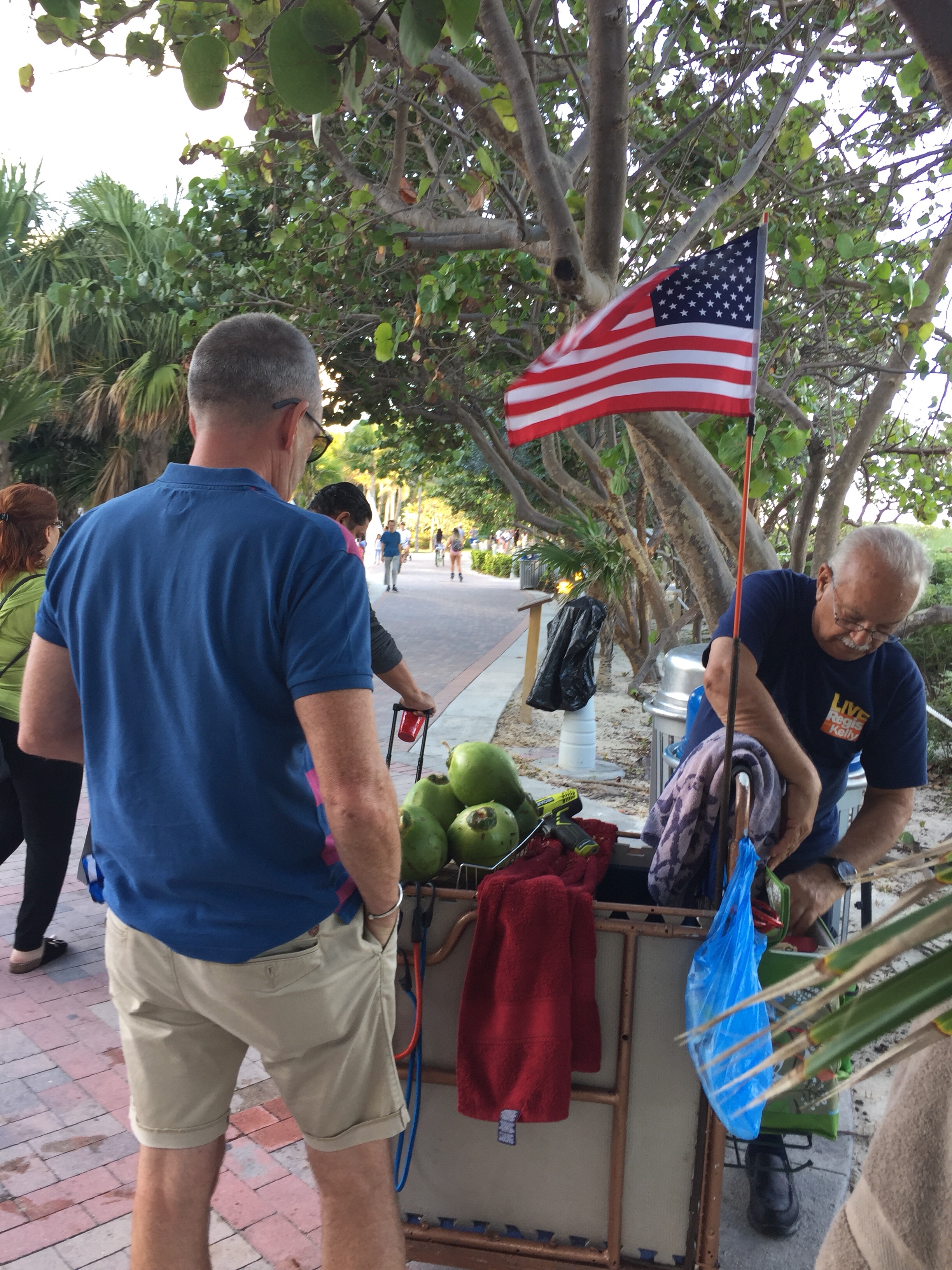 oh and a boat cruise around the harbour to see the usual movie stars ..gansters holiday homes etc

and one of David Beckham’s many homes. Hired bikes for a couple of hours and met one of the locals .. last night met these colourful guys who insisted they gave me a couple of Baby Ruth chocolate bars to try, they couldn’t believe we had never heard of them .. yes, there were very good 😊 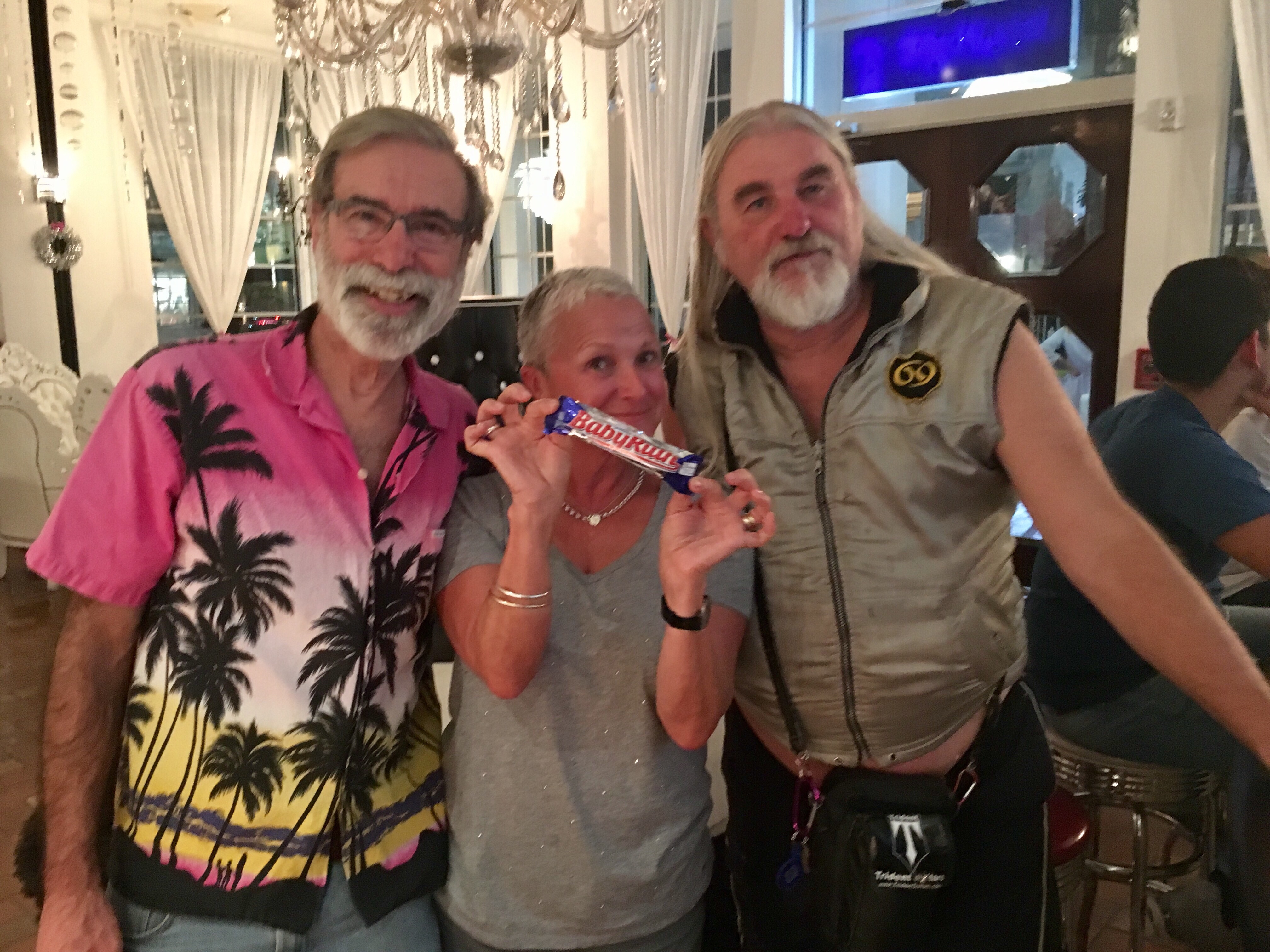 We were up early the next morning and picked up a hire car from Avis for the 4 hour drive back up to Orlando for our flight to London. Anyone who has done this trip will attest to the fact Florida is pancake flat with not a cyclist in sight. Not even a slight hill to add some spice to the trip.

We didn’t bother with a map or GPS as we just headed North then picked up the Turnpike. We caught the overnight with Norwegian Airlines ( haven’t flown with them before) very nice crew, almost new aircraft so wouldn’t hesitate using them again. Did we sleep ? Not a wink ! We stayed at the Sofitel Hotel at Gatwick airport overnight before catching another flight in the morning to Alicante to pick up Pinot.

We’ve done a lot of miles in Planes, Trains, cars, ships and ferries since we picked our Daughter Cara up in Milan in early September. It’s really been a very busy 3 months with very little time spent in Pinot so we are looking forward to spending some quiet time motorhoming again in the run up to Christmas………plus we will spend a lot of time walking and cycling just to help loose a bit of excess baggage around the middle 😳.

Love to all xx